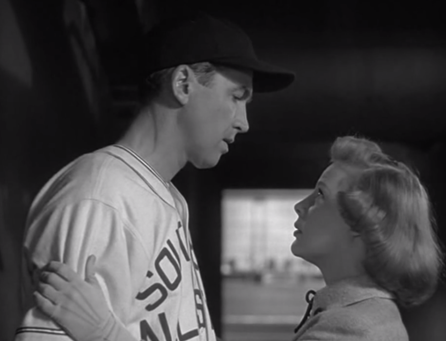 If you’ve never heard of the baseball player Monty Stratton, you’re not alone. In my days of wanting to be a ballplayer myself, I knew quite a bit about baseball Hall of Famers going back to the genesis of the game. But Stratton was not a Hall of Famer like Honus Wagner or Ty Cobb, George Sisler or Rogers Hornsby or even the members of the Bronx Bombers including Lou Gehrig and Joe Dimaggio. Though famed Yankee Bill Dickey does makes a cameo in this one.

Stratton was not in the same category as these men and there is a reason for that. Tragedy struck his life. Interestingly enough, Hollywood looked to make a movie out of it calling on the talents of Jimmy Stewart as well as director Sam Wood. It’s Wood’s association with the picture which causes me to surmise it was meant to be another Pride of the Yankees (1942) with Wood taking up duties again and one All-American in Gary Cooper being traded out for another in Jimmy Stewart.

No disrespect to Monty Stratton or anything that he went through but at face value, his story is hardly that of Lou Gehrig. Still, maybe that’s the point and we can learn something from that. Generalizing and putting all baseball biopics together is in error and in this case, it feels callous. This is a film that makes Monty Stratton’s story into his own and it’s at times winsome in its simplicity and still equally moving.

Watching this picture anchored by James Stewart in another everyman role is as charming as ever. Equally enjoyable is Frank Morgan or even the budding romance with June Allyson coming to fruition within its frames. His brusque mother (Agnes Moorehead) who only knows the tough life of a farm woman even has her affectionate side; you simply need to get to know her. Also, having an old pro like Jimmy Dyke playing the big league manager is yet another touch of authenticity that might be easily overlooked in the modern day.

Through and through, this is Stewart and Allyson’s film as we watch Monty make a name for himself going from being an indefatigable farm boy with a cannon to the minors in Omaha, and finally to the big leagues where dreams are made. Equally important to his career trajectory is the parallel story of how a potentially disastrous first date turned into a lifelong romance with his girl Ethel.

She sees him through a great deal both the highs like the birth of their son to the lows, a fatal event that will change Stratton’s life forever. It’s in this portion where we could criticize the film for stalling but it does rightfully so as Stewart must make a decision whether or not he’s going to fight back to regain his life.

Eventually, he does, going further than any naysayer might give him credit for. Then again, you get the sense that Monty Stratton was the kind of ballplayer that most folks found it in their heart to cheer for. Part of that appeal is Stewart’s typical geniality certainly but the man he was portraying had to be fairly special too.

The spectator in the movie theater might remark Gable and Turner are better kissers on screen but I’d truthfully rather watch Stewart and Allyson. They’re more my type of people.  In fact, I’m pretty sure I would have liked Monty Stratton too. He seemed like a humble fellow who lived his life with everyday dignity. They don’t always make them like that now. The same could be said for this movie.

The film closes with the prototypical “The End” credit but that really was not quite right. Because Monty Stratton was still pitching and had a long life ahead of him just waiting to be lived. That’s the power of this story. It recognizes a man who did not let circumstance deter him from continuing to live a full life.

Stratton died on September 29th, 1982 and within that time he made a second comeback to baseball, moved back to Texas to start a farm team, and was deeply invested in his community until his final days both in promoting Little League and attending his local church.