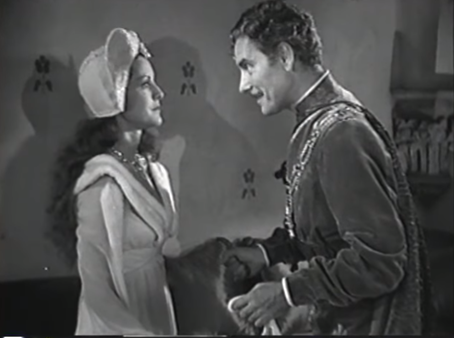 There’s a moment in the film that can’t help but draw us back to Genesis where Joseph (of technicolor dream coat fame) has risen in the ranks of Egypt and finds himself with the lives of his brothers in the palm of his hands. He’s able to toy with them while also blessing them immensely. It’s easy to see the hand of Providence at work. Nothing so meaningful happens in If I Were King but there is, nevertheless, a similar moment.

Ronald Colman plays the charming, most agreeable of vagabonds and that’s hardly a complaint. We might call into question the validity of his portrayal of such a mythic figure as Francois Villon but we can never doubt his pure charisma.

Francois Villon as witnessed in this film, directed by Frank Lloyd (Mutiny on the Bounty) is a glorified scoundrel who might be a far cry from the man who actually bore the name Francois Villon but, once more, do we care? Hardly.

Preston Sturges’ quill is in playfully fine form mixing eloquent verse with a lightness of being that’s able to upend typical medieval drama with its warring nations, kings, and battles. All of the aforementioned are present but they’re made rather more enjoyable. The tongue in cheek nature of it all enlivens any dips into needless melodrama.

Instead of stringing this man up for his obstination, insubordination, and theft the giggling king (Basil Rathbone) proceeds to make the same man commander of his armies for not only killing the most loathed traitor in the king’s ranks but also boasting he could do a far better job running the kingdom. The origins of a new medieval gameshow are afoot: King for a week.

Basil Rathbone shines in a particularly enjoyable performance for its various quirks including a cackling delivery that feels completely at odds with the persona he cultivated with the majority of his villainous roles. In other words, it’s a real corker.

Meanwhile, in his newfound place of power, the remade Grand Constable finds he has considerable influence. First, to free his friends from the caverns of the dungeon and being by the king’s side to advise him in his moment of crisis. You see, his generals don’t want to fight the militant Burgundians who are about to lay siege to his kingdom.

Villon receives a stroke of genius from the lovely lady in waiting (an exquisite Frances Dee clothed in royal opulence), unload all the kingdom’s food supplies to the poor so the feckless military leaders will get off their duffs and be stirred to action with their larders all but depleted. It’s a drastic and terribly outrageous solution but it does produce some results.

The earlier raucous swordfight within a tavern against the king’s constable is only surpassed and subsequently quashed by the sheer magnitude of the final conflict between the Burgundian marauders and the city’s protectorate — a sequence that was declared to use some 900 extras. It’s certainly no hoax watching the mad chaos of clattering steel.

It was some time into watching this medieval period piece that I realized if Hollywood were to remake such a film as this or one of a similar nature it seems like there would be an unspoken impetus to somber it up and make it into high drama.

All but gone are the days when period dramas could be fun with a touch of whimsy to go with the usual action, adventure, and romance. Errol Flynn and Ronald Colman, those charming heroes of old, are a forgotten breed of leading men and the last time I remember a film channeling this same enjoyment in such things was The Princess Bride now over 30 years ago.

In truth, I suppose the space for medieval heroes and swashbucklers has been edged out by newer and bigger blockbuster beasts. Namely, sci-fi and superhero mammoths that have taken over the main stage. And I have nothing particularly against said tent poles mind you, but I do long for more pictures like this one. Period pieces that don’t have to be so serious. They can have fun too (even if historical accuracy goes a bit to the wayside). That’s a pardonable offense when there’s no pretense for accuracy.

Because If I Were King is blessed by its rich and constantly comedic overtones. That is no doubt the gift of Preston Sturges. This picture can wear the strains poetry and still keep the mood a sprightly one. Films like this are something special.