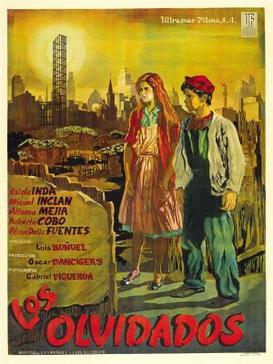 The opening narration of Los Olvidados asserts that the great modern cities of the world including New York, Paris, and London all mask issues of poverty and delinquency amid their magnificent structures. This is a universal problem that plagues Mexico as well.

In Los Olvidados a test case is being proposed and the solution left open-ended because change is still necessary. There’s still need for some kind of resolution. Whether it’s completely true word for word is nearly beyond the point because it feels authentic. There’s little need to make up a world as dire and ugly as this one unless there’s at least a grain of reality in every frame.

Where boys break out of reform school, stone blind beggars in retaliation, and form gangs as a kind of social safety net to lash out at their environment. Beating up the poor and the helpless. They too are poor but this band of theirs allows them to be less helpless and prey on others instead. That’s their main tactic of survival in their life of impoverished vagrancy.

It proves to be a harrowing exhibition in social realism and though defamed in its day, its candid and at times brutal depiction of juvenile delinquency has gained it a spot as one of Mexico’s most prestigious pictures. There’s no doubt that it’s a violent picture seething with adolescent rage. The only question is how much is environmental and how much is a product of the individuals?

As much as this film is disquieting and repulses me to the core of my being, I cannot deny its place as an important commentary and cinematic landmark from Luis Bunuel. The Spaniard is a master who always makes my skin crawl and challenges my very convictions. Los Olvidados succeeds in doing the very same thing again by forcing us to acknowledge the loathsomeness in the world that we so often want to brush under the rug. It’s there. There’s no denying it. Man left to his own devices will send the world hurtling towards malicious chaos.

There’s an intent to every moment with action streamlined but never feeling rushed or forced in its everyday rhythms that provide a seamless illusion of real life. Luis Bunuel still finds space to imprint Los Olvidados with his own surrealist vision as a young boy, Pedro, is haunted by a grinning corpse to mirror the dead body now laying in a ditch where he served as an accomplice. However, his disquieting nightmares are compounded by a mother complex. He wants her love and yet seems to do everything to receive her ire.

In a world such as this where we see the brokenness and the sheer depths of poverty, it seems like it would be easy to empathize and yet this film makes it rather difficult. Because some of these boys are so boorish. So violent and dirty-minded. There’s no sense of decency even if they wanted it and their leader Jaibo is the worst of the lot.

But there are two boys that I do have some lingering sympathy for. Pedro is not unlike the others. Out on the street getting into trouble and the like. And yet there’s something in him that is trying to reform. He looks to find work and he wants the love and affection of his mother once more. The problem is she’s already given up on him. There is no love in her heart. And his pals are constantly impeding his road to reform. That’s as much as an indictment as the city that has no effective system to give these boys a better life or the boys themselves who live wayward existences.

The second sympathetic figure simply goes by “Eyes” and he’s been waiting patiently for his father to return. He hasn’t. Instead, he becomes the guide to the ornery street musician who makes a living in the town square when he’s not accosted by young gangsters. “Eyes” gets pulled into the drama too but there’s an innate integrity that’s lacking in most of his contemporaries. He generally treats the old man well and respects the pretty young ingenue Meche. That cannot save any of them from an awful existence.

The final image is grotesque. Not for the graphic nature of the imagery but the metaphoric juxtaposition. A body thrown into a trash ditch like a bag of flour. There’s no value to it and the people who do it while not the perpetrators are further implicated in this societal problem. They trade pleasantries with the mother as she searches for her son — a son she never seemed to love — until he’s in trouble. The issues run so deep it hurts to watch. The finger can be pointed in any direction.

The problems must fall on the parents, adults, and peers who do not find it within themselves to speak up or to continue loving or fighting for change. Complacency and hard hearts are just as bad a problem as juvenile delinquency. Put them together and you sow nothing but generations upon generations of human beings damned before they even have a chance at a decent life. It’s over 60 years on and we’re probably still searching for many of the answers to these very same issues. As much as I would like to admit that this film is outdated, to make such a statement would be heedlessly ignorant.

Because of course Los Olvidados in English is literally translated to “The Forgotten.” There’s part of your problem right there. As humans we so easily forget. We brush problems under the rug, pass the buck, and so on. Before you know it years have gone by and a new generation of youths are all but forgotten. The deadly cycle begins again and never ends until someone champions radical change. Until that day they will continue as the unnamed, unwanted, forgotten foes of society. Los Olividados.