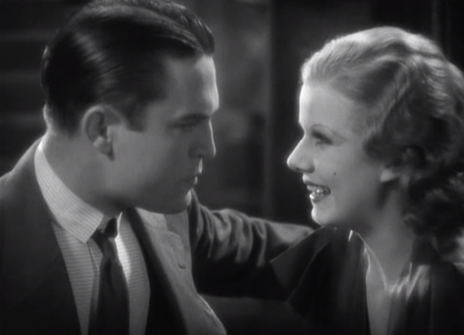 Ironically Harlow as a Red-Head feels more representative of her projected image than Harlow as a Platinum Blonde (1931). Lil is a malevolent seductress. A homewrecker. The queen of meretricious relations. Simultaneously frisky and fun.

But she’s got one specific man (Chester Morris) on her radar and she makes it her goal to bring him down. Of course, he’s married and he has means. Everything she could want in a man. Perhaps there’s a tinge of actual romance in the air too. She kisses him enough for it to be so.

She continually ambushes him to begin with and he’s not particularly averse to her. He’s not as strong as he would like to think. First, in his office. Then, in a telephone booth and so on and so forth. As strong as he is and as much as he glares at her, there’s only so much he can take. “Red” goes back to her boarding house to regale her roommate (Una Merkel) about her daily victories. It seems she enjoys the hunt, mechanizing her feminine wiles to serve her. But she’s not above knocking back a few drinks slowly sinking into a stupor on the floor with the lively strains of “Frankie and Johnny.” That about sums up the woman we have before us.

Finally, she locks her prey in a room with her and throws away the key as it were. In the end, it works. Soon Bill’s marriage with his sensible childhood sweetheart “Rene” (Leila Hyams) is utterly trashed. Lil has got him where she wants him and he resigns himself to this new lifestyle. Divorce follows. She’s got him tied down.

Their life together isn’t perfect as “Red” wants more of a society life with parties and notoriety. And of course, little surprise, there are other men she’s openly involved with. Still, she exploits her charms fishing for compliments, flirting, throwing out typical Harlow baby talk. All the works.

Baby Face (1933) with Barbara Stanwyck seems like an obvious answer to this picture’s themes. And it must be said that while there’s the inkling of an idea here, what the latter film has is a greater resonance because it’s not just a trashy romance propelled by a leading performance. But Stanwyck beyond being a siren also has a depth to her that while not fully fleshed out leads to some amount of conflict.

Here Harlow’s no good and that’s most of the novelty. There’s not a speck of true integrity in her and we are given few cues to why she’s the way she is. Maybe if we were provided more it would be easier to empathize even a little.

Baby Face makes me dismayed because Stanwyck is a tragic figure. Red-Headed Woman gets to me for a different reason. There is no remorse in Harlow’s “Red.” She’s just a sleaze and there’s little interest in anything else. It feels exploitive.

Everything is summed up perfectly by an uncomfortably comical ending. After taking a shot at her former husband and nearly killing him, she finds a life for herself in France with her chauffeur (a dashing Charles Boyer) no less.

F. Scott Fitzgerald purportedly got taken off the picture in favor of Anita Loos because he took the material too seriously. However, I’m inclined to want to see how his rendition would have panned out. For some reason, I cannot find it within myself to laugh at these characters. That’s undoubtedly a tribute to Jean Harlow but it’s still ribald entertainment any way you slice it.