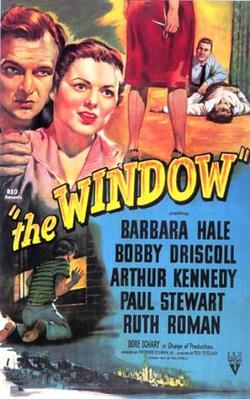 The main conceit is just too delightful to ignore. It posits the following dramatic question: What if the boy who cried wolf saw a murder being committed immediately afterward? Because that’s precisely what happens to little Tommy Woodry.

He’s one of those imaginative little boys who likes playing Cowboys and Indians while telling his contemporaries that his family has a large ranch out west where they raise horses. It all seems perfectly innocent except in close confines such stories take on a life of their own. Soon the landlord assumes that the Woodrys will be moving out shortly.

It’s not just this incident either but Tommy has a history of dreaming up all sorts of stories and wanting to teach their son good old-fashioned American values and honesty, his parents say there will be consequences if he lies again.

What happens next is so absurd and outrageous Tommy is sunk even before he’s begun. He spies the upstairs neighbors Mr. and Mrs. Kellerson (Paul Stewart and Ruth Roman) take part in a grisly murder. He does the fairly logical thing and goes to wake up his mother to let her know what he witnessed. But it’s not so logical based on what has already happened.

First, she dismisses his stories as a bad dream but after he goes down to the police station to get them involved, his mother is even more alarmed. Mr. Woodry comes back home from the night shift to hear about his son’s behavior and as much as he doesn’t like to do it, he does the fatherly thing and punishes the boy.

He’s meant to stay in his room and that wouldn’t be so bad if his father didn’t work nights and his mother wasn’t called away to take care of her ailing kinfolk. Because the Kellersons know he’s been snooping around and they’re not about to be found out — especially not by an inquisitive kid. When they figure out what he knows, he’s little better than a sitting duck.

If it wasn’t obvious from the outset the picture sets itself up for a claustrophobic finale that’s quite the piece of entertainment. Rear Window is one of my favorite films and it’s hard not to draw up comparisons between the two pictures because they both utilize their limited space well and allow us to get inside the plight of our protagonist in a way that’s excruciatingly disconcerting.

For L.B. Jeffries it’s the fact that he’s trapped in a wheelchair with a purported murderer living right across the courtyard from him. In this picture, it’s that little Tommy has his freedom revoked and finds himself made prisoner in his own home with his parent’s gone because they are angry with his constant fits of fibbing.

But more so than Rear Window which is a fairly opulent picture, The Window suggest the impoverished state of the characters at the fore, living on the Lower East Side as they do. Their lives are not glamorous at home or at work. They have a tough time scraping by and it shows in their dress and how they present themselves every day.

Arthur Kennedy and Barbara Hale do a fine job as Tommy’s parents because they feel like decent folks, generally humble and wanting to raise their son the best way. That doesn’t make their immune to parental blunders but, nevertheless, they love their boy.

Likewise, Paul Stewart is a bit menacing and thuggish veiling it with a good-natured facade while Ruth Roman normally remembered for fairly upright roles is cast as a wife who seems more frightened by her circumstances than anything else. She’s hardly a villain but that doesn’t make her any less complicit in this whole affair.

Bobby Driscoll was on loan out from Disney and he embodies the precocious nature of a boy in a way that’s completely believable and at the very least compelling.  It’s a wonderful live-action performance to fit right alongside his voice work before his life took a tragic dive into drug addiction.

It might be an unnecessary connection to make but director Ted Tetzlaff was formerly a cinematographer and one of the films attributed to him was Alfred Hitchcock’s Notorious (1946) from only a few years before. Hitch would come out with his home thriller in 1954. I’m still partial to the later film — it’s one of my personal favorites — but there’s no doubt The Window proves itself as a harrowing family thriller in its own right.