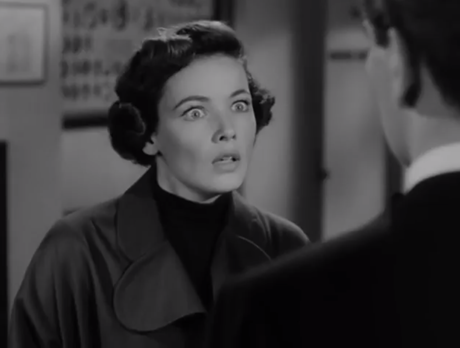 Despite being ludicrously absurd, it’s impossible not to get whisked away by the swirling cauldron of psychological drama found in Whirlpool. Otto Preminger adds yet another perplexing noir to his filmography and it seems reasonable that Whirlpool along with The Fallen Angel (1945) and Angel Face (1953) deserve more recognition though, it’s true his debut, Laura (1944) will forever be the benchmark.

But these three films share such fascinating themes beyond beautiful photography and quality staging. They find roots in some odd bits of quack chicanery like fortune tellers and astrologers while interesting themselves in psychologically unstable women and male confidence men who like nothing more than taking advantage of others.

Whereas Laura (1944) works exquisitely because the title character casts a spell on everyone else, Whirlpool functions in part because our protagonist falls under another man’s spell. But it takes something else, something in her past that he can prey on and exploit.

You see, in the opening moments of the film we find out something about Gene Tierney’s character. She’s a kleptomaniac which in itself is a fairly startling albeit intriguing revelation. And we don’t see it occur just the aftermath that follows. But here is a dilemma already. Her husband (Richard Conte) is a renowned psychoanalyst. How would it look if his wife was found shoplifting from a reputable establishment? The house detective catches her. The manager is looking to bring in the police. The wheels of justice are turning and scandal looks all but inevitable.

Then, in walks David Korvo (Jose Ferrer) a man with a certain magnetism that still makes him a tad unsettling. In fact, it’s pretty easy to assume he has ulterior motives. Because he so easily smooths things out for Mrs. Sutton so she is, to a certain extent, indebted to him. Something like that can quickly turn into a splendid opportunity for blackmail. Except the check comes and he rips it up so from thenceforward it’s a little more difficult to discern his intentions and it proves to be a wonderfully enigmatic performance from Ferrer start to finish.

It’s true. He is a charlatan. He’s preoccupied with astrology and then hypnotism which he uses on his new “patient” supposedly for her own good. But he’s had other women who have called on his services before. In fact, one of them has now sought help from Mrs. Sutton’s husband. Because Korvo had made her life miserable coaxing her to withdraw her daughter’s inheritance and leeching her happiness. Soon Theresa Randolph is found dead with Ann at the scene of the crime — the prime suspect.

By this time, you almost forget that Charles Bickford is in the film because the bewitched Tierney and stolid-faced Ferrer steal the show. But it is Lt. Colton (Bickford) who must get to the bottom of this whole twisted affair. He and Dr. Sutton are quick to write off the poor woman with a closeted kleptomania hidden under the cloak of a respectable suburban housewife. However, after hitting the beat, they know it stinks to high heaven but there’s no proof.

What can be said of Ben Hecht’s script is the very fact that it relies on unbelievable occurrences in both its beginning and ending. But in this very reality, there’s a certain continuity where the psychologically dubious extrapolations become the new normal. That in itself is unsettling.

It’s notable that when he has multiple figures Preminger never seems content to be stagnant, instead constantly utilizing close-ups and see-sawing camera movements that readily change the dynamics of scenes. The climactic moments proving a prime example.

The power struggle dictates itself in other ways too, namely in the physical staging of characters. Ferrer hanging over Tierney as he begins to hypnotize her. Bickford questioning Ferrer who himself looks so vulnerable lying in his hospital bed. But even that composition in itself is at times a put on as we soon find out. However, it’s phenomenal that the very projections up on the screen are indicative of what is going on with the film’s main point of conflict. This quality we can safely assume can be attributed to Preminger himself. He has an intuitive understanding of cinematic space and how to utilize it to his greatest advantage.