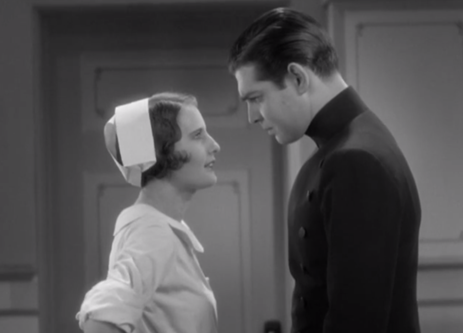 We’re introduced to the day-to-day in a hospital ward with mothers giving birth, delinquents under police custody, and bootleggers coming in on the lamb with mysterious ailments. Barbara Stanwyck arrives in the office inquiring about a position as a nurse and she is flatly rejected for her references and lack of a full high school education.

Reluctantly she exits only to make a connection in the revolving door with a white-haired genial doctor (Charles Winninger) who pulls some strings and lands her a spot as a trainee. Her roommate and guide to this new existence is the lively Maloney (Joan Blondell). The male interns send her a warm welcome too. Namely a skeleton in her bed which gets her in particular trouble during a late night bed check from the head nurse who rules the nurses quarters with an iron fist.

This is all only a setup of the films main concerns which have roots in sordid drama and soap opera-like thrills. The melodrama comes into full view as we are introduced to none other than a mustache-less macho Clark Gable who upon being asked who he is, replies “Nick the Chauffeur” only to be captured in closeup while eliciting a gasp from a night nurse.

It’s textbook stuff and then he proceeds to wallop her as she tries to use the telephone. But a smidgen of context is in order. Lora starts her first shift as a night nurse looking after two darling little girls. But from what she can tell they are systematically being starved and their perpetually tipsy mother, Mrs. Ritchie, seems to have very little input. Meanwhile, the doctor who took over the case when Dr. Bell was deposed is shady at best. All the while, Nick leers and strong arms his way around, making sure that Lora doesn’t do anything against the doctor’s orders. Conveniently that means no nourishment.

But “Little Miss Iodine” doesn’t go down without a fight. With the girls slowly wasting away upstairs and needless extravagant parties being held continually downstairs with booze freely flowing, Lora lays down the law. She smacks the girls’ mother around a little for her parental negligence. Also, it turns out that Lora’s new boyfriend comes in handy when he’s not bootlegging. They make a swell couple.

On the whole, this picture of emaciation is slightly disjointed and hyperbolic in its own right. There’s also probably too liberal an amount of undressing on camera. Because it’s only purpose is to be provocative.

I’m not quite sure if I ever figured out the mechanics of it all but there is an undeniable fury to it and William Wellman directs it as such through every beat from comedy to romance to mystery thriller. So with stalwart performances by Stanwyck and a no-good Clark Gable on the rise, matched by a certain enigmatic potency, there is enough meat here to make it a mildly diverting Pre-Code effort.