Even in its opening moments, Baby Face made my heart heavy. I look at Lily, this young woman played by Barbara Stanwyck and sadness wells up within me. Because her environment is so oppressive. Getting constantly pawed at and manhandled with a father who has no conception of love. Then, she opens the window to get away from the asphyxiating haze of cigarette smoke only to be met with more smoke from the steam engines outside. This isn’t a life that anyone should be subjected to and it’s brought into sharp relief because she is surrounded by so many filthy men: Mangy scuzzballs, if you want to get scientific.

But the picture, even in this opening moment, before it gets to the nitty-gritty at hand, grieves me because it still has increasing pertinence in the present world we find ourselves in. Isn’t that strange? But I am met with this fact time and time again. You would think I would be less surprised there is still nothing new under the sun. In such an environment, Lily is essentially perceived to be worthless and the men around her keep her down.

However, there’s one man in particular who rallies her to get off the trash heap. In fact, Bragg is a man who broadens her perspective and helps her to realize her own worth.  The only unfortunate part is that he bequeaths her the philosophy of Nietzsche. And I say unfortunate very purposefully because the language he provides her is like so.

“You must be a master, not a slave. It’s about exploitation using men and being strong to get the things you want.” It’s laid out as overtly as you could possibly expect. This remains only the root of a wider problem that is exasperated because, of course, this is exactly what Lily ends up doing. 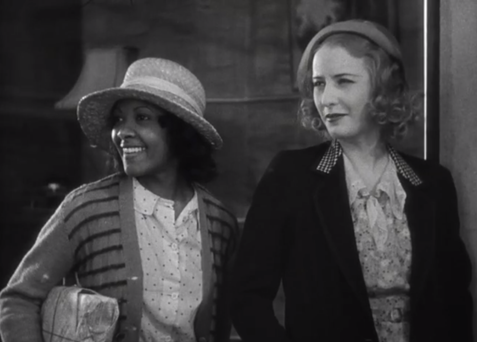 She goes to New York with her constant companion Chico (Theresa Harris) and subsequently charms her way into a job, slowly moving up the ranks due to her ambitions and calculated manipulation. There’s no other way to put it. She’s systematically sleeping her way to the top.

The funniest anachronism of them all is seeing John Wayne, young and handsome, behind a desk in a corporation. He is one of Baby Face’s early conquests. But believe me, there will be more. No sooner has one top employee lost his job due to Baby Face then another man has become seduced by her inviting eyes and soft touch. There’s one particular mirror shot from the ladies’ room that says it all. The man is saying one thing and when he sees her his whole demeanor changes. Like putty in her hands.

But there’s another running gag easily understood with a little inference. A close up on the exterior of the mortgage department with a soft pan to the accounting department or wherever else ambition takes her, the score playing “St. Louis Blues” saucily to say all that needs to be said. And you get the sense that it’s for these very interludes that the film was marketed.

It pushed the boundaries of the censor’s board at the time and many have supposed, rightfully so, that Baby Face was one of the pictures which actually led to greater enforcement of the production codes in 1934. Certainly, all this is true.

But more than anything, the most troubling thing for me is her Nietzschean code of conduct continually dictating her worldview. He is the man who most famously said “God is Dead,” not as a derisive proclamation but more so a disillusioned fact. There is no hope or grace found in such a point of view. But of course, Lily never received any of those things in her formative years so how is she to know? She just keeps plodding on using her attributes the best she knows how to make a comfortable life for herself.

To quote Proverbs, “her lips drip honey and yet her feet go down to the grave.” She’s nothing but trouble and yet I would never hold it against her. She makes us so conflicted because there is so much manipulation there — even vindictiveness — while she still nurses wounds from youth that we cannot even begin to understand.

Stanwyck never ceases to amaze me with her incredible range of performances and the deep truth she seems to mine in each and everyone to make them charming, funny, or heartbreaking — whatever the tone calls for. She always seems to have it in ready supply. It’s little different in Baby Face.

As far as the film itself, what we have here is the epitome of efficient Hollywood filmmaking that somehow is still laced with a potency of emotion, at times heartbreaking and at others verging on the salacious. Still, it’s a picture that leaves you with something. There’s no way that any of the Barbara Stanwyck faithful would forget her, but this picture gives another reason to stand up and take notice.

It’s a striking image as the phonograph turns and all the men in her life flash by. In such a short time there’s been so many and yet some passed by like a blip we almost forget they were there. George Brent is the most substantial and even he comes into the storyline far later. That’s purely a testament to the picture’s ability to really fill out the entire scenario with surprising depth.

However, it’s crucial for the film to end on a realistic and deadly note because anything else would be untrue to the life that Lily has lived thus far. It was never pretty. The denouement cheats a little bit by leaving events open-ended but all that’s left to say is Stanwyck is devastating. She just might bowl you over.