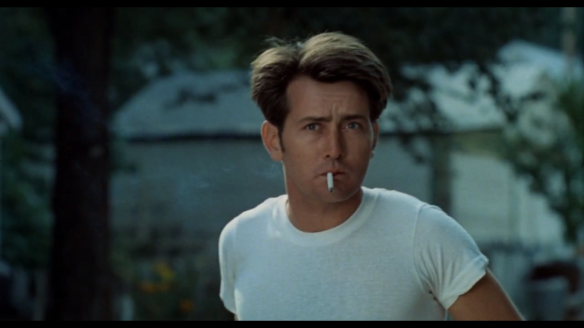 I’ve always maintained a great admiration for Terence Malick, even after only seeing two of his most renowned pictures, Days of Heaven (1978) and Tree of Life (2011). This a testament to his intuitive understanding of the image and how gloriously sublime it can be. It’s true his pictures seem to exist in their own strata, part reality and then this heightened stratosphere verging on the ethereal.

Now I’ve seen a third, his arresting directorial debut Badlands, and it remains obvious that though his career has progressed, his films at their very essence have remained the same. Malick is a Texas native who attended the AFI Conservatory and became a pupil of Arthur Penn.

It’s true you can see a cursory similarity in content between the likes of Bonnie and Clyde (1967) and this picture because we have the archetypal love-on-the-run narrative. But there’s hardly any confusing them in terms of execution.

Penn’s picture is upbeat, sensual, and almost flippant with these youths in revolt. It does feel like a kind of a statement for the 1960s. But Malick’s film is entirely matter-of-fact, a bit detached, and mystical. Even the music plays into this almost timeless quality that sets it outside of a specific timeline even as it functions as a kind of period piece.

We have a vacant serenity playing a backdrop to all the action with canvasses bathed with soft hues of light. As best as I can describe it there’s a dreamy, gossamer-like tint to the imagery. It feels warm and welcoming at first with a calm cadence until it no longer can exist as such.

Aided by Sissy Spacek’s innocent gaze of mundane wonderment in the world, it’s a southern story of the grimiest sort, which somehow winds up being a fairy tale romance in her eyes. Her voiceover is what holds the film together and never allows it to lose this illusory quality.

Loosely based on The Starkweather case, Kit Caruthers (Martin Sheen) is a high school drop out who collected garbage for a time and fashioned himself after James Dean’s rebellious reputation. He introduces himself to the hesitant, naive Holly Sargis (Sissy Spacek) who nevertheless finds him intriguing. Though many years her senior, they start accompanying one another, much to her father’s chagrin (Warren Oates). He knows the boy is no good.

Kit was never someone to let others dictate his life for him and with cool calculation, he moves forward with a plan, taking Holly with them as he goes out on the road. They commence a life together out in the open and it feels a bit like Robinson Crusoe. It’s no small coincidence they read Kon Tiki while lounging in a tree house they have constructed by themselves. It’s a far cry from its predecessors at this point.

Like Bonnie and Clyde, Badlands is a film depicting killings dotted across the land and yet they are, again, matter-of-fact, even forgettable, which seems terribly callous to admit. But there simply is not the same blatantly violent, in your face, bloodshed of the earlier picture. Continually any amount of drama is replaced with a trance-like dreamscape, aided by the fact writer, producer, director Terrence Malick was never one for intricate, pulse-pounding plotting.

He is a filmmaker and he gifts us indelible panoramas of America. A billboard set up against rolling prairies and the most glorious of cumulonimbus clouds. Naturescapes cultivated with luscious greens that might be found in Rohmer’s Claire’s Knee (1970) and frolicking easily at home in the works of Renoir. Conversely, we have a house burning that feels like an otherworldly funeral pyre. The old must burn to give way to the newfound promised land Kit and Holly are embarking for.

While the image is always paramount in a Malick film, one could argue the music also has a hallowed place with Carl Orff’s “Gassenhauer” adding this oddly tinny, adventurous note to the score. Then, Nat King Cole’s “A Blossom Fell” provides an immaculate encapsulation of romantic ideals whether our fugitive lovers are driving, dancing, or just taking in the scenery. It’s perturbing to have something so melodious play in the wake of such brutality.

To say the film reaches a conclusion is slightly deceptive. More so, it simply fades away. Finally, some local police catch up with them. First, they send a helicopter and then a police car is dispatched. Holly is left behind and caught. She recounts how she moved on with her life after Kit, getting off on her charges and marrying the man who defended her. And Kit was caught too but it came on his own terms. He accepts it with his usual unemotional equanimity.

Watching Martin Sheen in these moments is riveting because he seems content with how things have run their course. As friendly and personable as you might expect and yet capable of such dehumanizing evil. It’s the dissonance of these scarring acts of aggression followed by him pragmatically fielding questions with the media and then being shipped off to his execution with his guard wishing him well. How can such a man exist?

There is no reason to Kit. He simply commits to actions, which are completely detached from any feeling. And yet he is simultaneously capable of some amount of human connection and camaraderie. It leads me to surmise he is a character who could never exist outside the context of celluloid. There you have part of what makes him such a compelling study. Because other films have already filled out the contours of disillusioned antiheroes and killers to our heart’s content.

Like any admirable filmmaker, Malick provides us with a novel distillation of age-old themes. He makes the accepted paradigms feel fresh and perplexing again. Thankfully for us, he’s never ceased going down a road paved with his own vision and personal preoccupations. Because at its best, his individuality is capable of speaking to willing audiences in fundamentally unique ways.