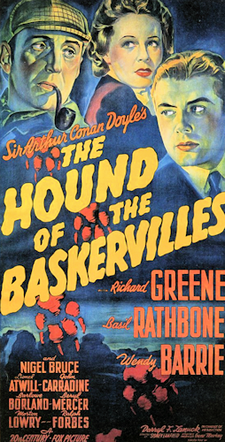 Though there’s not a shred of doubt this picture was filmed on a Hollywood backlot, our story takes place in 1889 on the Moors of Dartmoor in Devonshire. It’s all very British and when you do a quick scan of the most British figures coming out of literature and pop culture, you would probably find few higher on the list than Sherlock Holmes.

For better or for worse, this is one of the films we must thank for countless Sherlock Holmes archetypes as established by Basil Rathbone’s characterization. Joined by his oafish, vacuous-minded friend Dr. Watson (Nigel Bruce), Holmes looks to investigate the mysterious death of one Sir Hugo Baskerville which supposedly came to pass due to the curse of a demonic curr labeled “The Hound of the Baskervilles.”

Right at this very moment, his nephew Sir Henry (Richard Greene) is coming to take up residence at the supposedly deadly manor deep in the heart of Devonshire. Holmes asks for Watson to accompany him as he has important business of a different nature to attend to. It unfolds as a stylized gothic murder mystery with typical studio melodramatics that are still somehow invariably delectable.

Some might be especially surprised to find out about Holmes’ absence for much of the film’s middle though Rathbone makes a stunning reemergence just in time to do a bit more sleuthing and confirm his numerous empirical suspicions. Bruce proves just how vital he is because there must be a stooge to make the hero look all the more preeminent.

The picture is hardly a whodunit. Deciphering the guilty party is quite simple to guess, working with the tropes that we have in our toolkit. But in the habit of Arthur Conan’s Doyle’s work, the enjoyment is in our hero’s highly-perceptive method of deduction.

While the short stories are probably more rich in this regard, what this film has in an iconic turn by Basil Rathbone — a man who was often made into a villain and yet was just as impeccably cast as a hero. However, to match the aesthetics at the time this picture has a broad menagerie of characters and the foggy atmosphere with the easily conjured shrouds of Gothic Hollywood.

We have shifty house servants, a deranged killer out on the loose, a husband and wife trained in the art of seances, and the crotchety old buffoon who is constantly threatening lawsuits. They are among the casts most colorful additions. Yes, we even get an appearance from the Hound, though, in fact, he’s actually a Great Dane.

It’s hardly an exercise to work your brain too strenuously but it’s a jolly fun piece of entertainment with several true moments of intrigue and menace. The pleasure is in its economy as well because the adventures of Sherlock Holmes as portrayed by Rathbone and Bruce proved so popular they were serialized on both radio and many more films to come.

Of course, when this effort came out, 20th Century Fox wasn’t so sure how their new hero would fare and so they conveniently cushioned his billing and his sidekick between the two love interests. I have nothing against Richard Greene or Wendy Barrie whatsoever but they are hardly the reason we turn out to see this picture.

Still, it seems necessary to at least acknowledge that one would do well to start with Arthur Conan Doyle’s work first and once you get a sense of them, enjoy this film without reservations. You can test the merits of Sherlock Holmes on this picture but you would do better not to. Because this is a Hollywood confection more than anything, proving to be a diverting adventure even as it helped usher in the accepted mythology of everyone’s favorite amateur detective for future generations.