If there was an atypical even offbeat Anthony Mann picture, then God’s Little Acre would probably fit the bill. Based on the wildly popular and vehemently decried Depression-era work of the same name by Erskine Caldwell, it essentially serves as a second outing for much of the cast and crew involved with a picture from the year prior, Men in War (1957).

We have Mann reteamed with his favorite, Robert Ryan, and young Aldo Ray. Then, most prominently, we have cinematographer Ernest Haller and composer Elmer Bernstein returning. Even Phillip Yordan once more fronts for blacklisted Ben Maddow. And yet the actual results are oil and water.

The opening notes of a folksy title ballad sound off, seemingly more at home in a live-action Disney classic than a mainstream drama such as this. In truth, it’s an outmoded brand of melodrama. We just cannot hope to look at the pedigree the same way with its southern gothic and a hint of hillbilly.

That’s right. It’s part Jed Clampett, the other section Tennessee Williams, edgy and sweaty as any 50s film at its height. But what leaves an impression is not only the raciness for the day but the unadulterated playfulness. This is real Georgia down-home entertainment and it benefits from these qualities.

Ty Ty Walden (Ryan) is a slightly scatterbrained matriarch, who resolutely believes that his daddy left behind gold on their property. He’s hellbent on getting him a piece of the wealth and he’s pursued his aspirations by leaving his family acreage dotted with holes. 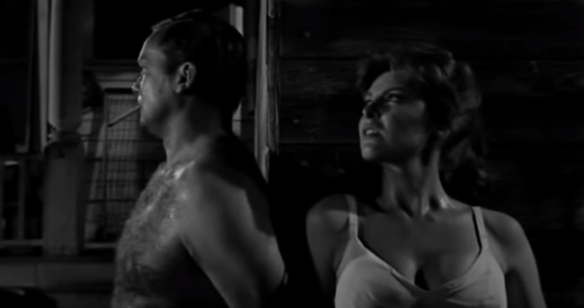 He’s dragged his two sons into it too (Jack Lord and Vic Morrow), who are both a bit neurotic in their own right. The jealous Buck is constantly at the throat of his ravishing bride Griselda (Tina Louise in a sweltering debut) believing she still has the hots for their brother-in-law Will Thompson (Aldo Ray), a man married to the eldest Walden gal (Helen Westcott). He’s not altogether wrong but he’s not helping the situation any either. Then there’s Shaw. He just repeats everything his older brother says. They’re not the sharpest tools in the shed. They take after their father.

Meanwhile, their youngest sister, the bodacious southern belle Darlin’ Jill, is quite the looker herself. Buddy Hackett is just about the same as we remember him in all his pictures. That voice. That blubbering. That rotund lovable girth. His character, the aptly named Pluto, comes looking to court Darlin’ Jill who strings him alone as is expected.

Otherwise, the cast also features a criminally underused Rex Ingram as a farmhand and Michael Landon in a thoroughly unique role as an albino. Though only a minor player, he proves a crucial component of the plot since Ty Ty is convinced that albinos have an impeccable radar for gold and he pressgangs the boy to use his remarkable abilities. The beauty is that no one seems to outrightly question such a notion. They just move along like normal. In the meantime, Darlin’ Jill has fun tantalizing her rotund suitor and making eyes at the intriguingly pale Dave Dawson.

The latter half of the story follows lusty looks and passionate clenches as forbidden love is rekindled between Will and Griselda. It seems like just about everyone is being pawed over by everybody else. Tremors are going through the household with Ty Ty putting it upon himself to bring his family together and keep them on amicable terms. It’s not such an easy task with so much dysfunction at hand.

Will’s wife is beside herself as her man gets drunk and has some vague notion of turning the power at the old plant on so work can commence again for all the impoverished locals. But Ty Ty’s also in a scrape for cash and relationships have only deteriorated into fiery hell between Buck and Will — a woman still caught between them.

What are the main takeaways from the picture? It’s a rather incredulous piece that’s provocative and dull and maladjusted all at the same time. Ryan once more shows his capability at ably anchoring an entire film. However, all I could think of was the fact that if God’s Little Acre had been a bit more conventional and garnered a few more accolades for hard-hitting drama, we might be remembering Tina Louise as a cinematic sex symbol instead of a “Movie Star” from Gilligan’s Island. Maybe some movies get buried serendipitously.