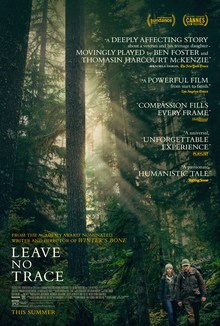 Leave No Trace instantly reminded me of two distinct reference points. The first relates to a man named Richard Proenneke who lived in the Alaskan wilderness for 30 years building his own cabin and raising his own food in a life of tranquil solitude.

Then, the other comes from a book I read when I was a kid called My Side of a Mountain, written by Jean Craighead George, following a young man who literally goes out into a forest, builds himself a home hewn out of a tree, and subsists off the land. The common themes running through these narratives are already quite obvious.

If you’re like me, especially in this technology-saturated world of ours, sometimes it seems like we’re pretty helpless and ever plugged into our devices. But some of us look at such stories and see a sense of romanticism. It seems like a nice idea — like a picnic or going camping — out communing with nature. Except it only goes so far. We love to read about it and live vicariously through others but we stop short of getting involved ourselves.

The pair existing in Leave No Trace is actually up to the challenge of living this life on the move, out in an Oregon nature reserve, surviving off the land, and in so many ways remaining self-sufficient. They are far closer than many of us can probably ever comprehend. Because everything they do has near life and death consequences. You don’t live as they do without getting close and forming a bond. There is no other way to exist aside from constant symbiosis.

The father, Will (Ben Foster), a former member of the military, has passed down so many practical skills to his daughter, training her up to survive out in the wild. It’s like an extreme version of homeschooling. Tom’s (Thomasin Mackenzie) social skills are lacking but if you stacked her up against anyone her age she’s probably more resourceful and capable than any of them. Because her brain has not been programmed by technology nor is it awash in a world of a vacuous glut of constant stimuli. Their total immersion in nature is refreshing as is their independence and very stripped down lifestyle.

But this journey is particularly worthwhile because it is still set in our world and so these two very unique individuals are forced to brush up against society and the norms in place. Technically, they are trespassing and so in a way they take on the mantle of fugitives constantly on the run as nomads dodging the authorities. You can only hide and break camp and get away so long. Even for people as attuned and regimented as them, there’s always a slip-up.

Now there are good folks in the world — social workers and then common, ordinary people who try and give them a leg up. There are ways to get Tom and her dad back into society without completing severing their ties with the naturalism that is most comfortable for them.

It is a story about a relationship, a very close-knit relationship between a father and daughter. But it becomes a story of maturation as well. Tom realizes her dad is hardwired a certain way. Whether it is restless feet, the demons of post-traumatic stress, or some unnamed specter, he’s constantly dodging, or simply discontent with modern society. He is never capable of settling down.

Meanwhile, she is willing to make allowances and sculpts each place they find together into a new home. Still, it never feels like she’s selling out completely. True, she’s enamored with a new bicycle and mentions in passing how having a phone would make it easier to communicate and yet the core aspects of her character do not waver. Tom still maintains her immense inquisitiveness and affection for all flora and fauna in the great outdoors. She loves dogs, makes friends over rabbits and honeybees. These are the places she is truly in her element.

However, she is also a willing participant, ready to enmesh herself in an ecosystem of people. She gets comfortable around the relationships she makes and yearns to set roots down somewhere. The great revelation comes when she realizes her father can never be that. Instead of always following his lead, she becomes more and more of her own person, making her own decisions. It has nothing to do with a split or not loving him anymore. This is about being mature enough to let other people go and being okay with the realization.

Read only as words on the page, Leave No Trace could be chock full of high drama but it wins its victories through the subtility of its leads and the more nuanced touches to fill in around the naturalism and bevy of sojourning survival tactics. Debra Granik directs the movie with an eye attuned to relationships and while generally unadorned, the movie is full of wonderment in the world’s natural beauty.

It exhibits the lush greenery quintessential to the rainy, fresh imagery that the Oregon coast conjures up. There is arguably no better film that I’ve seen to capture this environ in all its verdant glory. While a completely different sort of film, I could not but for a moment recall one of the greenest films to ever be on the silver screen, The Quiet Man. Because whether romantic or familial there’s no question the milieu of a film is so crucial in fashioning how we perceive a cinematic experience. Like its predecessor, Leave No Trace is a roaring success channeled through tranquil trails of its own creation. Sometimes those trails must break off and lead toward different destinations. Being content in moving on is key.