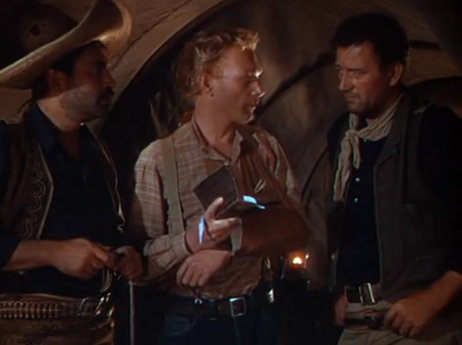 3 Godfathers is a Christmas western if there ever was one and it’s probably the most sensitive picture that John Ford ever made. Anyone familiar with Don Siegel’s short film Star in the Night (1945) might recognize basic similarities with this picture based on the same biblical motif of the three wise men.

Ford honors his dear friend, the late, great Harry Carey even christening him the “Bright Star Of The Early Western Sky” and it’s very true. In fact, the director probably would have never remade the film if Carey had not passed away in 1947. The reason being that he had worked on an earlier version called The Three Godfathers way back in 1916 and the Ford-helmed silent Marked Men (1929). Not satisfied with just that, the director subsequently cast Harry Carey Jr. as The Abilene Kid alongside John Wayne and  Pedro Armendáriz. Although a big star in Mexico by this point, Armendáriz garnered little respect from Ford as you might expect.

The script penned by film critic turned screenwriter Frank S. Nugent with Laurence Stallings and Robert Nathan, takes the story of three lawless bank robbers and turns them into modern-day incarnations of the trio of kings from the advent story.

The heady combination of some on-location photography in Death Valley, as well as early Technicolor, gives Ford’s picture an impressive composition even as it can’t quite stand up to his most iconic images. The story as well is a mild even maudlin affair at times but for the very fact that Ford rarely seemed to inch into such territory — or Wayne either for that matter — it does come as somewhat of a treat to behold.

Because here we have three hoodlums, men of ill-repute who have robbed a bank and are on the lamb running for their lives. Ward Bond as the local sheriff — a decent man who also happens to be pretty shrewd — chases after our antiheroes with his hapless deputy (Hank Worden). Though they ride off, he cripples their water supply and looks to cut them off from any of the wells scattered across the territory. The lack of water could prove to be their downfall.

However, the story takes its most obvious turn when they happen upon a wagon. It turns out to not be completely abandoned as a one lies isolated and about ready to give birth to an infant son. Though she is too weak to continue she makes a vow with them that they protect her boy and make sure he grows up healthy and strong.

She doesn’t know their previous actions only the character that they exhibit in front of her and maybe it is even her angelic trust in them that causes each man to agree to this promise. All of the sudden they throw of the shells of their former selves and take on this seemingly virtuous task.

However, that does not make survival any easier living off the drippings of barrel cacti and traipsing across the salt flats with the noonday sun beating down. First, losing their horses in a ferocious maelstrom and with water scarce, they do everything in their power to take care of the child. Reading a baby book on how to look after an infant and bathing and feeding him. His Uncle William sings him “Gather at the River” as a lullaby. And all three men agree their godson will share their three names. Robert Hightower (Wayne) bickers with Pete about using Spanish around the baby. They want him to grow up American.

The Bible passage about finding a donkey to ride into Jerusalem gives some guidance fittingly as the child makes his pilgrimage to the town of New Jerusalem. We know that a miracle just might be in order.

The inevitable happens and Wayne must face off against Bond but what makes that dynamic far more meaningful is the child in their midst. Because Hightower’s care and concern for the child’s well-being reveals a side of him that is the complete antithesis of his outlaw persona. It’s a reflection that he is a redeemable figure and the film strikes a compromise between a really saccharine ending and cold hard reality. While no one will concede that it’s Ford’s best work, it’s nevertheless a fine vehicle for the talent and a thoroughly unique take on yuletide moviemaking.