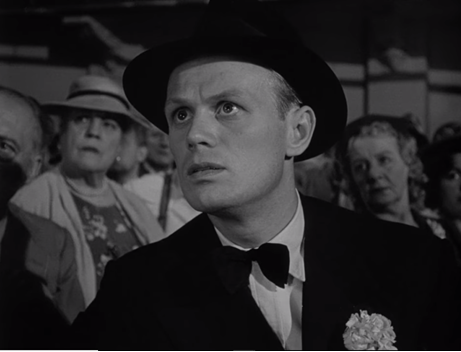 I’m not sure why but like Tommy Udo, the name Harry Fabian always stays with me when I think of Richard Widmark. One is the apex of sadistic evil and the other an archetypical noir hero met with utter calamity.

It’s true that for those who know a bit of the oeuvre of American director Jules Dassin, Night and the City might be perceived as a new rendition of The Naked City (1947). However, instead of New York, the suburban jungle of a thousand stories captured in documentary-like realism, we are given instead London, in all of its seedy glory, warts and all.

It’s fitting we meet Harry Fabian on the run from some unseen pursuer and whether someone is there or not hardly matters because that’s just Harry. The life he leads means he’s always in a jam with someone and always looking for the next big scheme to get him out of the doghouse. One might say he knows the dives of London like the back of his hand. He frequents them often trying to drum up business.

Because Harry is Widmark certainly at his most charismatic, an artist without an art and a constant idea man floundering in hot water every minute of the day. Like all such figures, he aspires to be something more than what he is. We’ve seen it many times before. For no conceivable rational reason except love, Mary (Gene Tierney), a nightclub singer, has remained faithfully by his side, despite all his flaky tendencies.

The mad chemist cooking upstairs also proves to be a pretty nice guy who cares deeply about Mary’s well-being. Especially since it seems that she is so easily tossed around by Harry. He doesn’t seem to care for her well. In fact, if we can cast it as such Harry is the Homme Fatale, even a slightly sympathetic one, while Adam (Hugh Marlowe) is his utter contrast in every way — the man who seems to have nothing but Mary’s goodwill in mind, even if he is in love with her too.

“The Silver Fox” is an underground tavern with some small consequence to the plot. Because you see, under the grubby hands of portly Phil Nosseross and his opportunistic and manipulative wife (Googie Withers), Harry works a hustle.  He drums up business like an all-purpose promoter, fishing around for unsuspecting out-of-towners and worming his way into their confidence. Meanwhile, Mary remains the main attraction with a floor show. They do quite well. Mary has scrimped and saved a great deal but Harry is still unsatisfied. It’s all small potatoes.

He’s waiting for the next great lightning rod of inspiration to strike and of all places, it comes at the fights. A big-time promoter (Herbert Lom) tells him to keep away because he’s already profiled Fabian as a no-good scrounger who cannot be trusted. He’s not wrong. However, Harrys a quick wit when he needs to be, instantly gaining the favor of formerly renowned wrestler Gregorius. 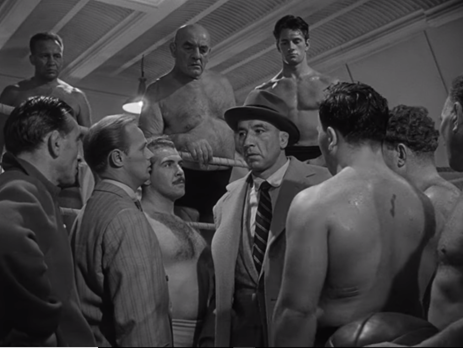 Not only is he disillusioned with the way that modern wrestling bouts are fought, he also has a young pupil named Nikolai who he deems can take on any man. What makes his stamp of approval stick is the very fact the old man happens to be Kristos’s dearly beloved father. If Harry has this formidable ally in his corner he’s got it made.

Soon all the cash he can lay his greasy paws on is sunk in Fabian’s Promotions, even coaxing the boss’s conniving wife for a bankroll. He’s got his angle; he’s got his shield to help him shoulder his way into the wrestling game. It’s a cinch. But he’s also got everything riding on this endeavor because that’s his game. Go big and risk the chance of falling flat on his face.

So with Kristos all but threatening his life and a scorned husband pulling out his backing unless Harry can land The Strangler (Mike Mazursky), a competitor Gregorius has little taste for, that’s the end. The utter elation is Harry pulling a miracle out of his hat for the fight of a lifetime but just as easily the rug gets pulled from under him. Fate is a cruel taskmaster. 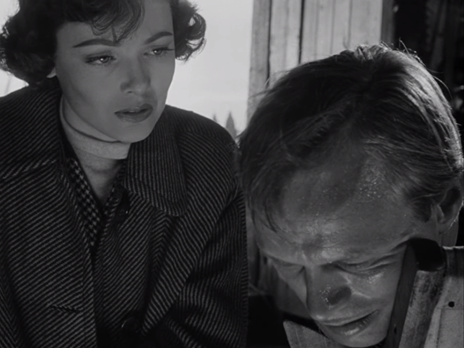 Now a price sits on his head which essentially means he’s a dead duck. His dreams of success evaporate instantly. In the latter stages of the film, Widmark scrambles around London down all the back alleyways and abandoned brickyards he can. But everything he does seems futile. He has no friends with that much money at stake. The irony is that even Harrys last foolproof scheme doesn’t take when he pretends Mary is turning him over to Kristos for the cash. It wasn’t to be. For their love or for Harry. Noir is nothing without a heavy dose of fatalistic tragedy to become its ultimate undoing. Night and the City is little different.

As the story goes, Jules Dassin would be blacklisted during the production of the picture and therefore had no hand in the editing or scoring, at least to his liking. Thus, we have two distinct cuts. Otherwise, after a rough patch stricken by the Blacklist, he got back to work in France with the deeply revered Riffifi (1955). His career would have a second life all throughout Europe, yes, but for all intent and purposes, his days of hardboiled American noirs were over for good. All in all, he left behind a stellar body of work during the late 1940s. Night and the City remains a testament to a perennially underrated director.

Note: I watched the British version with a score by George Frankel opposed to a different American cut with slightly different footage and score by Franz Waxman.