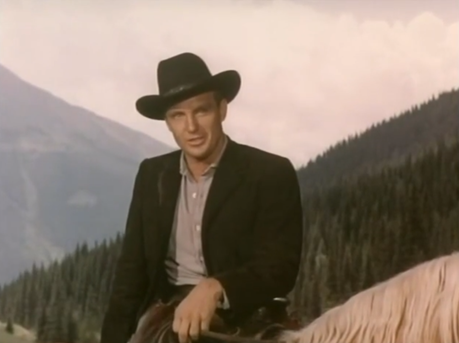 The backdrop is important to understand where we’re at in America’s history. It’s the 1860s. We’re in the Colorado Territory but it’s the eve of the most egregious war that ever was fought on American soil. Already blood is boiling between diehard Northerners and the Secessionists who want nothing better than to bury each other under a foot of dirt.

We get a taste of it in a man name Zeb who helps save another man’s life from marauding Indians only to turn right around and wish he’d left him for dead upon hearing he’s from North Carolina. However, he’s not the one giving orders. He and a more reserved companion, with a covert mission of his own, are working under hardy Virginia Mayo who is intent on setting up a dress shop out west. She obliges the stranger, the wonderfully named Owen Pentecost (Robert Stack) and he gladly joins their peculiar company.

When they get to town, Pentecost challenges a local saloonkeeper (Raymond Burr) in a high stakes poker game and in the last hand winds up owning the place. As a result, he’s made few friends on either side of the brooding town except for the flirtatious chorus girl Boston (Ruth Roman) who frequents the joint and stacks the deck in his favor. 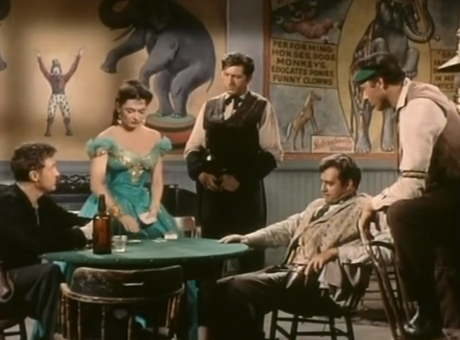 He takes up with his brethren below the Mason-Dixon line because he’s heard rumblings that they have a payload of gold and no way to get it back home. Their goal is to use it to bankroll the early stages of the inevitable war. Pentecost is no rebel and no patriot. He’s purely in business for himself and that makes for a thoroughly enjoyable character given the present climate. Because he ends up being an outsider to both contingents.

Instead, he looks to start a revival, preaching a gospel of gold as he’s got a lot of stakes in his ownership, which have yet to be excavated. Though most people around hate his guts, some are in desperate need of money. He lets everyone know he won’t tolerate any double crossing and yet it ends in the inevitable. One man is left for dead and it means very little to Pentecost until the orphaned son comes west, oblivious of the fate of his father or by whose hand. Pentecost takes him under his wing, foregoing to tell the boy about the precise events behind his father’s untimely demise.

He has no sentimental lumps in his throat about going off to war. His only goal is staying alive and he has quite the test ahead with Fort Sumter surrendering and the territory overrun with bloodthirsty Union men as it is. The northern loyalists come to his saloon with one thing on their minds. Making “The Rebels” pay by filling them full of lead. Hanging is too good for them.

But violence only sows more violence and hate still more hate. The collateral damage is far-reaching. The minister (Regis Toomey) watches the world continually shot to hell around him and he puts his hands up and runs into the fray to be some voice of peace even as he too is affected.

A daring escape is finally undertaken with the Union soldiers camped out nearby looking to gun them down decisively if they won’t surrender their goods. It ends up not mattering. The wagons loaded with gold take off in the cover of the night as the loyal Northerners look to chase them down led by the Union officers who have been tasked with the assignment.

It’s at this point that Pentecost finally seems to get a noble streak. In one sense, we see a certain amount of gallantry even on the verge of such a traumatic war but there are also tones that are unquestionably, even morbidly dark. It’s as if to suggest that war might bring out heroism in people but it can also bring out our very worst tendencies too. It’s just our innate nature as human beings.

It seems such a long distance that we have traversed since those opening shots on the brightly lit plains, one newcomer, a lady giving the orders, and two men who will turn out to be deeply invested in this newly forged war. The Civil War changes the entire complexion of the film by its end, even the mores of our main character.

Cinematographer William E. Snyder boasts chiaroscuro color photography that’s so easy to take for granted because it bathes most of the picture, particularly the later scenes where it seems like more and more drama unfolds during the evening hours.

Part of the reason there’s little to no fanfare around a picture such as this is it’s wholly counterintuitive for B-grade entertainment to be formalistically stylish but that’s what Tourneur always seemed capable of since the days of Cat People (1942). It’s little different here and in one of his final westerns, he continues shooting beautiful sequences with storylines that don’t have any right to be.

There are interludes where Great Day in The Morning has rather peculiar beats and one could say the ending comes early or it’s anticlimactic or it didn’t matter, to begin with. Any one of those conclusions could, in fact, be correct but regardless, some might be taken just as I was with this unassuming oater.

It’s buried movies like this keeping hungry cinephiles always searching for a new delight. It doesn’t have to be a glowing success but if it even momentarily sparkles with shards of inspiration while bringing together a fine cast, we have a winner. Maybe I’m just an ardent Tourneur fan or have a soft spot for Ruth Roman and Virginia Mayo, not to mention the western genre as a whole. Either way, I have few qualms in liking this outing for precisely these isolated reasons.