Buenos Aires conjures up a very specific Rita Hayworth film — the one that remains emblematic of her career and also typecasted her — you probably know it too, Gilda (1946). Thus, when You Were Never Lovelier opens in the same city, there’s this instant evocation in the parallel worlds. Because if these pictures take place in the same location, in theory, then cinematically they are vastly different.

Our first introduction is a face wedged behind a pair of binoculars. Once they’re pulled away we see Fred Astaire looking glumly as his horse trots by to the finish in last place. It sums up his struggles with gambling. He is a loser. Why does it matter? Though he’s a famed dancer back in New York by the name of Robert Davis, in this foreign locale he’s just a hoofer in need of some cash.

Quite by chance, he runs into his old pal Xavier Cugat who forewarns him that local club owner Eduardo Acuna (Adolphe Menjou) is quite the disgruntled customer. He’s not very easy to please. His constantly harried personal secretary Fernando, a distant relation, proves a perfect example. Consequently, burlesque comedy veteran Gus Schilling just might be the most hilarious addition to the cast based on his huffy indignance.

But just as Cugat predicted Acuna isn’t impressed by Davis nor does he want to sign him. Right now he’s simply ecstatic that his eldest girl is just about to be married. Next, in line is his daughter Maria (Hayworth) who has her pick of all the boys in town, though she never commits to any of them nor shows more than mild interest in their advances.

It all almost feels too suffocating as an insufferably schmaltzy family drama. There was enough room in my heart for Three Smart Girls (1936) even Four Daughters (1938) but another such movie might be pushing it. Ingenue sisters bustling about, mothers providing sniggering inane conversation and the father is not even as lovable as Charles Winninger or Claude Rains, who instead holds onto a ludicrous tradition that daughters must be married off in order. Worse still, he manipulates his daughter into falling in love with someone who doesn’t exist. All in her best interest, of course.

Astaire and Hayworth couldn’t get together fast enough. But when they do its hard to take our eyes off so why bother getting stuck on all the various mishaps? For instance, the fact that Menjou is the hands-on father, he’s doing his best to manufacture a romance for Maria through boxes upon boxes of orchids filled with notes professing the love of a secret admirer. Its only function is offering a point of miscommunication and misunderstanding. 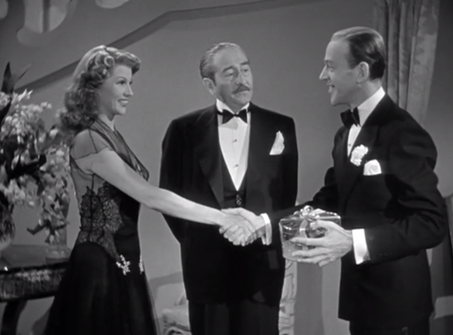 Despite a less than cordial introduction, Hayworth sees Astaire with new eyes when she mistakenly believes him to be her mystery man. Father feels like he’s in a bind and so he orders Davis to play the part and let her down easy. He’s not about to let his daughter get married to HIM!

Astaire keeps his physical talents on ice for a time barring a few foot taps, getting his first real showcase at a wedding where he flexes his vocal cords. His pure tonality and diction made them perfect pipes for innumerable American standards. Though he doesn’t heat up his taps until 35 minutes into the picture.

His first substantial meeting with Ms. Acuna and her family turns out far differently than any parties planned, namely Mr. Acuna or Robert. “I’m Old Fashioned” sums it up as our two stars go out on the veranda for some quality one-on-one time and share a dance together.

Hayworth sports the most seductively saucy raised eyebrow leading Astaire in one exchange to ask her, half-jokingly, to turn around. Staring at her face — beautiful as it is — melts him to jelly. He can hardly get his thoughts together in her presence. There’s also the dissonance of what he’s been instructed to do by Mr. Acuna and how he feels for this girl.

Despite purposefully forgetting to invite Mr. Davis to a fancy dress Anniversary Gala, an invitation manages to find its way to Robert regardless, setting up the final act in this tempestuous matchmaking affair. Acuna is in dire straits. The game seems to be up and yet the suitor he had long wanted to get rid of, falls on his sword and helps the other man save face.

Never fear. We know that our two stars are fated to be together. Later Astaire comes clomping around in a suit of armor and promptly tumbles right off under the fair maidens bedroom window. And yet his girl gladly takes him anyway derailing her white knight complex and dancing off into the distance as nice as you please.

As much as the mechanisms of this story drive me up a wall, I cannot dismiss Astaire and Hayworth. Its a minor vehicle for both but a spotty delight nonetheless. The very fact that Rita Hayworth herself considered it a personal favorite is merit enough. One might imagine that it’s every young dancer’s dream to keep time with Fred Astaire. It was no different for Margarita Carmen Cansino. Gilda was passion twisted up in perverse contortions. You Were Never Lovelier allowed it to be innocently saccharine instead, like a dream of childhood. Sometimes we need those movies.