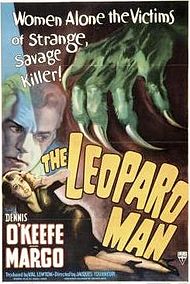 It’s fitting that a pair of castanets act as our entry point into the latest entry from Val Lewton’s RKO unit. Not only do they instantly grab our attention, but they foreshadow the auditory nature of the film and, in the cultural context, provide a little shorthand for where our setting might be.

Because with this stereotypical “Latin flavor” we find out soon enough we are indeed in New Mexico. At the local nightclub, Kiki (Jean Brooks) bemoans the fact her rival Clo-Clo (Margo) is constantly clicking, and it does seem blondes like herself are on the downside. However, her boyfriend, a fledgling publicity man (Dennis O’Keefe), has a new stunt to make waves with the viewing public.

When he walks into her dressing room with a leopard on a leash, she nearly dies of fright, and we have entered into the kind of territory intent on making our B feature a pulpy pleasure. Kiki reluctantly makes a grand entrance with her new pet and makes quite the impression as patrons look on with shivers of trepidation. Except her moment doesn’t last long as Clo-Clo scares the creature off and it goes racing off into the night — a beast off on the loose. One can only imagine what a deadly cat might get up to lurking in the shadows on any given evening…

From this point onward, the picture introduces a plethora of players from a fortune teller hiding in the shadows with her deck of cards just waiting to tell Clo-Clo her fortune. There’s the hapless bloke Charlie who gave up his prized leopard to Manning and wants his remuneration.

Then the local girl deathly afraid of the beast at large and nevertheless gets locked out of the house by her mother until she fetches the cornmeal for her father’s supper. We know the inevitable is about to happen. The creature will find her. Her world is developed almost solely through sound. The drip of water. Feet trudging through the dirt. A train passing overhead. They punctuate the scene immaculately leading into the big reveal. Because we know what is waiting for her…

She makes a mad dash to the front door of her home crying out to her family to open up but she gets no further. Like Cat People before it, The Leopard Man is made as much out of what is not seen and it has one of the most startling cinematic death scenes executed through utter minimalism.

Because although Manning and his girl feel awful about their hand in this girl’s tragic death, they soon realize more might be afoot. Another grisly death follows and then a subsequent evening Clo-Clo…

It is the stripped-down sound design in the picture that reflects the Lewton/Tourneur unit at the pinnacles of their powers. Where pure suggestion is imbued with so much meaning. So little can be so very much. Whereas M was a picture where the killer has a calling card, in this film the murders can be remembered by their accompanying sounds.

The wind whipping through the trees as a woman sits locked in a garden. A car engine driving off to get someone to open up the gate. Rustling leaves being stepped on and then quiet. With Clo-Clo it’s little different with the same repetition of her heels clicking on the pavement in rhythm with her castanets. Then, she too reaches a finality.

Despite the stylistically rewarding elements, The Leopard Man gets less interesting with time as it comes out the leopard might be masking a more mundane serial killer plot. Not to sound overly callous, but this is more of a real-world development. Aside from courting too many characters who dilute the impact of the whole story, The Leopard Man feels more stagnant than its predecessors.

The greatest pity is how there isn’t the same unnerving magic hanging over the picture. It probably has too big a stake in reality. What its predecessors were blessed with, in narrative terms, was the supernatural mixed in with everyday reality. The Leopard Man falls on the wrong side of the fence, unable to leave us with the same type of lingering specter. Its strengths were always in what was not actually there, instead of human beings of tangible flesh and blood.