The ever effervescent Deanna Durbin is sprawled out on the seat of a train car feverishly reading the pages of her thrilling mystery novel aloud. She happens to glance out the window only to stop and see a man bludgeoned to death with a crowbar! It was through the window shade, and we don’t see any blood, conveniently, but we do have a story.

Although it’s a corny hook, Lady on a Train goes with it full throttle. She’s left her loving daddy behind in San Francisco for the streets of New York City. H.G. has entrusted her to one of his most accomplished underlings, Haskell of the New York office. That’s all well and good, but the best part is the typically befuddled, huffing, stuttering shtick of the every reliable Edward Everett Horton.

Durbin brings her chipper energy into all sorts of scenarios beginning with her leaving her oblivious minder in the dust as she looks to get the word on the murder she witnessed. The police station is manned by an officer (William Frawley) who finds her story pretty thin and how could you blame him? It’s utterly ludicrous.

But always the fix-it girl, Nicki Collins goes sleuthing on her own, with a little qualified help that is. She resolves to track down the mystery writer of her new favorite page-turner, Wayne Morgan (David Bruce), accosting him at work and following him and his put-upon fiancee (Patricia Morrison) to the theater, bugging him even more.

All these elements feel like well-trod screwball paces, which they are. Surely, this is the man who will fall for her persistent charms — eventually. Thankfully Lady on The Train is a mash-up, leveraging all of its assets. Because we never forget this is a mystery and yet set during the Christmas holiday as it is, we have dashes of yuletide cheer sprinkled in.  Of course, Durbin has quite the pair of pipes so we have to have a few token tunes thrown in. It always keeps us entertained.

However, it’s at the very same newsreel she crashes, Nicki realizes the man she saw murdered — Josiah Warring — shipping magnate and newsreel star. What else is there to do but go traipsing around the frozen grounds of the deceased in her heels — of course. She somehow wanders in on the reading of the will and finds herself conveniently dawning an alias as Margo Martin who just so happened to be the fiancee and rich new heir to the dearly departed.

His two dear nephews are present (Dan Duryea and Ralph Bellamy) as well as the scandalized Aunt Charlotte. She cannot stand such a harlot in her presence. Of course, other menacing characters are working behind the scenes. A thick-jawed chauffeur (Allan Jenkins) and a dubious man with glasses (George Colouris) always stroking his cat sinisterly, run things in the creaky old manor. Somehow Nicki gets out of quite the jam and even makes quite a convincing chair as well. Lucille Ball would be proud.

The music mentioned in passing arrives. It brings the story to a standstill with a version of “Silent Night” relayed over the phone to her father, melodious but completely out of left field. When you have Deanna Durbin it’s a must to have her sing. She does it later as well giving a knockout floorshow to keep her cover, conveniently locking her alter ego in a closet and getting everyone else to keep mum. 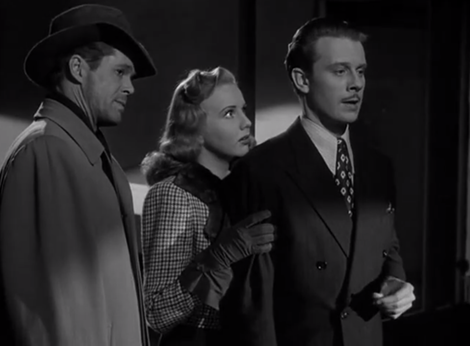 The movie is continually piled high with bits of mischief comical and otherwise. Her mystery-writing partner-in-crime gets in a wine cellar fistfight as she looks to evade the men in pursuit of her. She conveniently holds the plot’s MacGuffin in her possession — a pair of bloody slippers — while also turning his girlfriend off for good. The final act keeps up the shenanigans as the murder plot is revealed in a pleasing fashion.

It’s true The Lady on a Train finds itself an agreeable niche between screwball and mystery drama. As such, it just might be about the perfect vehicle for Deanna Durbin’s talents, although she, regrettably, would leave Hollywood for good soon thereafter. The story is not afraid to get a little crazy — leaning into its wonkiness outright — and yet there are interludes of definite intrigue.

It comes down to the actors. Horton and Bellamy come off as screwball mainstays. The likes of Duryea and Coulouris couldn’t be more noir if they tried, with archetypes literally inbred into their character DNA. It’s Deanna Durbin’s charm that allows the picture to carve out its rambunctious path. She spearheads the wild ride with all sorts of plates spinning and bits of thread getting tangled, representing all the people and things she finds herself caught up in.

To its credit, what could have been a jumbled mess endears itself as a mixed-bag of all sorts of fun. It’s one of Durbin’s finest outings. Pleasant surprises, however small, are sometimes the most enjoyable.