Thank you Wonderful World of Cinema and In The Good Old Days of Classic Hollywood for having me in The Claire Trevor Blogathon!

Just this past year I’ve entered a transition period in my life. Often transitions are hard because they signal changes for each and every one of us. For me, that change came with moving back to my home country and finding a new job.

One of the perks of finally settling in and looking around was realizing how classic film lore can follow us wherever we end up. Because it’s true the institution I work at now has quite personal ties with our venerated star Claire Trevor. In fact, due to her patronage and involvement later in life, she has a whole building, nay, a whole department named after her!
That’s some impact. Where to begin?

Thankfully, the Claire Trevor School of The Arts’ website has already done a great deal of the heavy lifting for me when it comes to summarizing her illustrious career. She had quite the remarkable run as a multifaceted entertainer. Many of the names mentioned I’m sure will bring warm feelings of acknowledgment from my fellow classic movie aficionados.
Here is an excerpt from their home page:

A three-time Academy Award nominee, Claire Trevor won the Best Supporting Actress award for her 1948 performance in Key Largo, co-starring with Humphrey Bogart, Edward G. Robinson and Lauren Bacall. In 1956, she won an Emmy Award for Best Live Television Performance by an Actress for Dodsworth, which also starred Fredric March as part of NBC’s Producer’s Showcase. Both awards are prominently displayed at the Claire Trevor Theatre in the School’s Arts Plaza.

In 1948 Ms. Trevor married Hollywood producer Milton Bren and soon after moved to Newport Beach. She retired from acting in 1987. In her last years she spent her time traveling, painting and pursuing philanthropic endeavors. To the School of the Arts, she was a star on-screen and in-person.

In fact, I made a pilgrimage to the Arts school to see if I could find anything else with her footprint. As students milled about going off to their next classes, I broke off and headed toward the theater bearing her name. 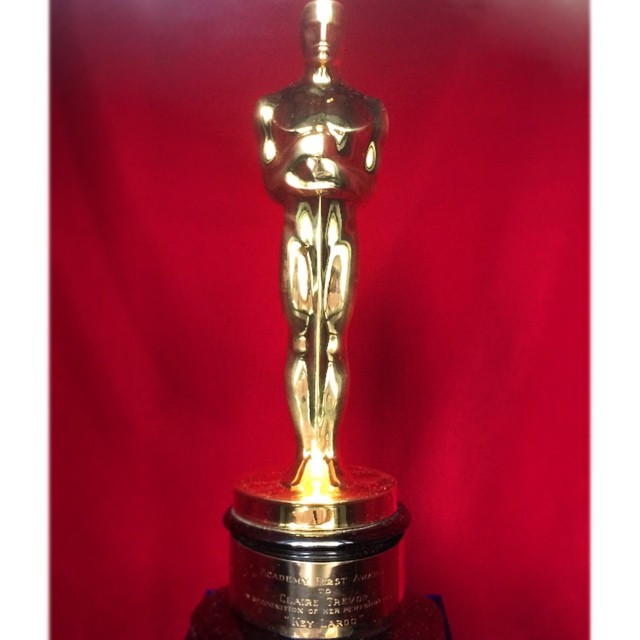 It’s true the two artifacts are very prominently and proudly displayed behind glass for the viewing public. And yet you could walk past them without even knowing they are there (or caring). But this fan was certainly intrigued. I was a foot away from living history.

I tried to snap a picture but sadly the photo evidence just did not do the award justice. The same goes for the other piece of hardware — Ms. Trevor’s Emmy for the production she did of Dodsworth in 1956.

To me, it’s extraordinary these monuments of film history are sitting there right out in the open under our very noses. I’m led to wonder how many people from this current generation have any idea who Claire Trevor is/was? She might just be a donor on a building even as she means so much more to many of us.

Whether it’s because of Key Largo or her other so-called “bad girl” roles in Murder My Sweet or Raw Deal. Maybe you have a fond memory of her playing opposite another fellow Newport Beach local, John Wayne, in Stagecoach, who coincidentally, has an airport named after him.

I must admit I wasn’t able to dig into her involvement with the school much more or figure out if there is any other memorabilia on campus. That might have to be an investigation for another post.

However, if nothing else, I do feel inspired to ask students I may meet — especially art students — if they have any idea who Claire Trevor is. If the answer is no, my response wouldn’t be one of derision but education. Maybe I can help them learn a little bit about this woman who, even in classic film circles is often slightly unheralded.

I’ll finish with this fitting blurb again from the Claire Trevor School of the Arts because they speak to her personal investment in the arts as well as education. Here it is:

She was a passionate advocate of the Arts and Arts education. During the later years of her life – she retired from professional acting in 1987 – Ms. Trevor became involved with the School of the Arts and its students, who came to cherish her attendance at their performances and value the wisdom and professional advice she shared so generously with them.

Ms. Trevor was a frequent visitor to the School, sitting in on rehearsals and interacting with student actors and faculty. She liked getting to know the drama students and seeing their work, according to those who knew her at that time. She often spoke of the important role the Arts had played in her life, and she believed that using one’s imagination to its fullest is necessary in order to live a happy life. She was thrilled to be able to help the School’s students achieve their goals and assist them, in some small way, according to her friends.

According to her stepson Donald Bren, “She was also very impressed with the quality of the students and faculty here, so [her] gift is an appropriate reflection of both her own artistic legacy and her commitment to the artists and performers of the future.”

So if you were ever curious whether or not there was a monument to Claire Trevor, now you know. It’s literally the foundation for generations of new artists and creatives who have been blessed through her own dedication and passion for culture. And that’s regardless of whether they realize it or not. Her legacy is quite an extraordinary one going well beyond her iconic screen career. What’s even more amazing is how it’s still alive and well to this day!

3 thoughts on “Claire Trevor School of The Arts”