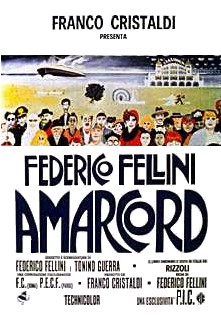 The most magical moments of Federico Fellini’s Amarcord occur at the very beginning and near the end. First, when the puffballs flutter through the air as a sign of spring and then, later, when a soft layer of powder signifies the advent of winter.

It’s a reminder of nature, of seasons, of how life is made up of rhythms, from beginning to end. If you live in California you miss out on that kind of tangible expression of life. You cannot capture the lyrical quality as the Italian maestro captures them over his vignette-driven spectacle with the aid of editor Ruggero Mastroianni.

Part of the reason I loved living abroad — in Japan specifically — there was some sense of the seasons, the utter sereneness of new-fallen snow, and a word to describe the wistfulness that often goes along with nostalgia and the lasting impression of memories (“Natsukashii”).

Fittingly, “Amarcord” is a provincial Italian expression for “I remember,” and this film is full up on quaffs of nostalgia and playful observation from the always lively creative reservoirs of Fellini. You cannot acknowledge the satire of his film without appreciating the affection embedded within it. They are closely related. Because even as you see all the faults and foibles, you cannot help but cast a sympathetic eye on these imbeciles — at least the lovable ones.

If someone else did it, you would get the sense of something mean-spirited, but when it’s your own people and your own way of life, somehow it comes off as not only humorous and perceptive but surprisingly warm.

The pacing is free; the scenes as loose as can be. Our only real markers of change are the aforementioned seasons. Around them, we get to know people. Spring means puffballs but also the local burning of an effigy on a giant bonfire to bring in the new season, complete with firecrackers and festivities.

School life is a lark full of windbags and crotchety oddballs who obliviously try to impart knowledge to their pupils on the highest arts. Their study regimen includes Greek, mathematics, the frescoes of Giotto, ancient history, the relation between church and state in Mussolini’s society, and so on. Each is a lost cause.

Around the dinner table, Mama and Papa Biondi have raging fits in what we might deem typical Italian fashion. They’re constantly bickering and scolding the bambinos for every infraction. In some upside-down manner, it’s a sign of their love and concern.

It’s true the town’s adolescent population, including their son Titta, get up to all sorts of dirty tricks, languishing in their fantasies, and going to confession only out of duty to their parents. There’s nothing contrite about it. Perhaps they don’t know any better.

You can make this argument judging from more general observation. Through Fellini’s lens, a fascist nation under Mussolini is often ridiculous. Flirtatious “Bellas” like the town hairdresser Gradisca (Magli Noel) swoon with nationalistic fervor at rallies, races, Grand Hotels, and the triumphant passage of the SS Rex — a vessel of national pride. That is until it capsizes all the beaming onlookers in their dingies.

One is reminded life is simpler and full of everyday peculiarities. Take Uncle Teo who gets a day on the town, outside of the mental institution, only to spend most of it barricaded up a tree, proclaiming how he wants a woman. One can only imagine it must be a lonely, dreary place on the inside. Then, there are snowball fights in the streets with the paths carved out of the snowpack and Gradisca a perfect target for all the gamely youth.

Nino Rota’s score accentuates so much mood, so much atmosphere, adding to the visual carnival, like a jaunty march and it is, taking us through time and sending us to places all over the little town.

On this grand scale, I’m inclined to like the idea of Fellini’s carousel of images, at least more than the particulars. This whirling, lively, rendition of life in its march of time speaks to so much about existence itself. The themes of looking back at the old ways — with nostalgia — but then also picking apart where we’ve come from to see the flaws and the idiosyncrasies. Some worthwhile, others worth stripping away and dismissing.

One of the most alarming takeaways is just how bawdy Italian culture is. Now it’s nothing new, but we are reminded of uncomfortable truths. Like the fact, Gradica is the ravishing eye-candy for every leering male in town, young and old. It speaks to so much about the male heart and mind, obsessed as it seems to be with women as commodities.

Eventually, Gradisca finds a man, her “Gary Cooper,” and we don’t have much inclination if he’s worthy of her or not. Still, it signals a change. Her wedding is a joyous Italian affair, but it also signs the beginning of the end. It’s as if, when she goes, along with her goes all the trimmings of their youth.

I am reminded of one moment when Grandpa is wandering around aimlessly in the fog. He’s not exactly a saint either. Regardless, he loses his way and laments the fact there are no trees, no people, no birds, no wine. If this is death, he’s not one for it. The situation solves itself easily enough when a carriage rattles by, and he’s found to be right outside his house.

Could this be Fellini’s way to comment on the situation and then temper it so quickly? Because a lot of the characters in Amarcord seem to be caught in this oblivious sort of fog. The greatest tools at Fellini’s disposal are merriment, humor, and even vulgarity to try and defuse situations, whether about love, death, politics, religion, whatever it is. And it’s a relatively effective form of satire a lot of the time.

However, every once in a while you remember it can only get us so far. The “eat, drink, and be merry for tomorrow we die” mentality, doesn’t quite fill one up with assurance. At least it’s not lasting. Because whether we like it or not, time is always high-stepping onward regardless of whether we’ve made peace with it or not. The turning of the seasons signify life and also death. No one feels that more than Titta. That’s what he’ll remember. Only time will tell if it gets any easier.