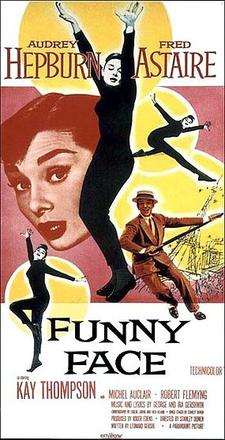 I’m not an expert on fashion photographers, but with only a passing interest in the industry, two of the most luminous names I know are probably Richard Avedon and Bob Willougby. Their names seem to crop up more than almost anyone when you consider film stills. It’s no coincidence that they both famously did shoots of Audrey Hepburn: one of the most widely photographed women of all time.

I never realized it before, but it also seems little coincidence that Richard Avedon is fairly close in name to Richard “Dick” Avery, a fashion photographer, played by Fred Astaire in this picture. Avedon himself was an advisor on the musical even providing the now-iconic headshot of Hepburn, capturing her iconic eyes and the contours of her face.

That’s the first level of reality being reworked for a bit of frothy fantasy. We’re met in the opening minutes by a histrionic tastemaker, Magazine matriarch Maggie Prescott (an uproariously assertive Kay Thompson) who comes off a bit strong but slowly sinks into our affections. Ruta Lee is constantly scampering about with the rest of her staff, getting whisked around by Prescott’s every whim.

She champions a change in direction for Quality magazine as they’ve gotten a bit lax and set in the status quo, and so she catalyzes a pink extravaganza to shake up the fashion world. It just might work.

Astaire is as affable as ever, remaining mellow with age and yet the models he has to deal with, in his line of work, are shown to be ditzy and a dime a dozen. He proposes an even bolder deviation from the norm than Prescott. The idea: Taking a bookkeeper, frumpy and austere at first glance, and turning her into a starlet.

Hepburn makes for the sweetest intellectual, running a bookshop that gets overrun by a magazine syndicate in Greenwich Village. She’s all but lost in the fray while simultaneously giving Avery the touch of inspiration. It’s right there in her face.

As she flees from the editor’s frenzied staff of ladies, intent on finding her and making her over, it’s in the darkroom where she seeks refuge and comes face-to-face again with Avery, who lightens her spirits and makes her feel at ease. Now I can check another thing off my list, as Hepburn and Astaire share a lovely darkroom dance together, which I hardly remembered from before.

In the end, she takes a minor liking in the idea of traveling to Paris for a photo shoot, even if it’s only a means to get her closer to the philosopher that shes always deeply admired for his work with empathicalism. Apparently, it’s all the rage in some circles.

At any rate, a new kind of fashion icon is born. She’s denoted by “Character, Spirit, and Intelligence.” Imagine that. Of course, the bookish Jo Stockton doesn’t see it either. She confesses, “I have no illusions about my looks. I think my face is funny.” Upon closer observation, the near autobiographical aspects seep out again.

Because, if memory serves me right, Hepburn never considered herself attractive or glamorous, even if she was seen as such the world over. Her figure was too slight or her nose too this, and her eyes not enough that. It’s the typical human fallacy to only see the blemishes and imperfections. We either have too big a view of ourselves or too little. It takes other people to straighten us out. We see a funny face, and they see the character that dwells therein — the adorableness and glamour Audrey Hepburn personfied.

In Funny Face Hepburn also gets to relive some of her training as she initially had an extensive background in ballet and dance as a teenager. Her most visible number comprises a beatnik hangout teaming with new and peculiar forms of artistic expression. There she is right in the midst of them whipping around with a peppy hand-clapping verve that sees her arms and springy ponytail flying too.

Back on the fashion circuit, she’s turned into a stunning pink bird of paradise with the spotlight beaming down on her and everyone entranced by her pure exquisiteness. Meanwhile, Astaire gives his cane dances of old a facelift with an umbrella and overcoat, including a brief interlude as a whimsical matador.

“He Loves and She Loves” has them at their most euphoric, acting outt a wedding scene that can never be. They are co-workers and nothing more. But when the fashion gala is made a shambles of, and they have a major tiff over a certain French philosopher named Emile Flostre (Michel Auclair), it looks to be the end of the story. However, we’ve seen enough movies to know not to get up and leave in the seventh inning. There’s a comeback in the ninth.

Hepburn’s voice makes an appearance in all of its demure glory. While not spectacular in nature, I’m a proponent of hearing people’s actual voices when they’re given the task of trebling through a tune. I’m of the sentiment that I would rather hear an unadorned, even “warts and all” performance opposed to the airbrushed “dubbed” showings that were so prevalent. Hepburn was a particular casualty of this phenomenon in My Fair Lady (1964), even as her quivering rendition of “Moon River” goes down as one of the most intimate performances on film. I rest my case.

While not the most cohesive musical out there, we have enough glimmers of fun and frivolous entertainment to more than satiate our wants. Of course, our stars are two of the most sunshiny personalities the movies ever bore, and together there’s the expected amount of good-natured amiability. At least, in the end.

Likewise, Cole Porter and the rich imagery courtesy of Stanley Donen, Richard Avedon, Technicolor, et. al. make the balloons brighter and the wardrobes all the more luxuriant. A true feast for the eyes, as they say, even if the plot could be tipped over with a feather.