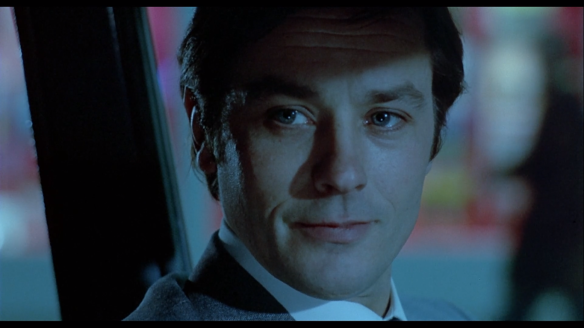 “The only feelings mankind inspires in policemen are indifference and scorn.” – Eugène     François Vidocq

Some of the great filmmakers are not great because they document a reflection of the world. More so they bend the world unto their own artistic vision, allowing us to see landscapes, plotlines, and people under a very particular microscope.

One might wager Jean-Pierre Melville is such a filmmaker. All his works are noir whether photographed in black & white or color. The palette does not matter. Because it has to do with temperament, stylings, the way characters talk, what they wear, and the things that take up their time.

Un Flic is about as typical as you might get in such an underbelly. It’s about a cop on a beat. He gets to work when the city sleeps. But of course, what does make him extraordinary is the very fact he is played by Alain Delon. If there is a man we could nominate for defining Melville’s hero, it would be he. Again, whether good or bad, it really does not matter. In this world, both function in a similar manner. There is a calculated aloofness. A predilection toward violence and yet some semblance of a moral code, wayward as it may be.

The events begin with immediately novel imagery. Torrential rain, crashing waves, a beachfront bank, in that order. It’s both environment and plot being established because said banks are often in the habit of getting burgled. So it is with this one.

The ubiquitous trenchcoats and fedoras are donned by the perpetrators. In a Melville picture, they are always in vogue. The added touch is dark sunglasses to conceal their identities. The quick cutting back and forth to wordless close-ups of the four co-conspirators help give the heist the much-needed cadence. It’s all in the build-up of the suspense, whereas Melville moves quickly through the events.

The deed is stripped down to the barest essentials. Guns coming out. Cut to cash in a bag. A bank vault being opened. Bank employees with their hands up. The audience needs little else. Except for the designated hero trying to fight back and thence the wrinkle in the plot. They screech off into the fog and our story is born like all the great heist films of yore.

Beyond black and white, blues and grays seemed to be Melville’s fondest companions. His world is made of them. Sleek and austere. Cool and detached. There are few better descriptors. Alain Delon’s piercing eyes match them well and as Un Flic is often a film of searching glances and competing eye lines, it’s more than a good fit. 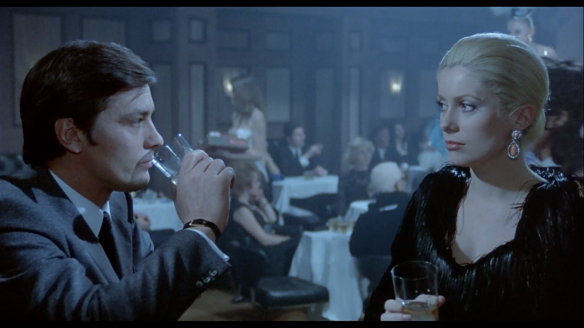 Is there a more spectacular power couple of the 1970s than Alain Delon and Catherine Deneuve? It’s hard to think of one. There’s the most peculiar scene with the commissioner wandering through a nightclub, staff getting ready for the evening. He goes to the piano, tinkers for a few notes, and sits down to play. Cigarette between his lips and I think there’s a drink sitting on the edge almost like it’s there waiting for him. Deneuve comes out — hears the tune — listens as if it’s a song they’ve known for years, shared together in each other’s company.

Mind you, it’s possible none of this could be true, but in Melville’s world they might as well be Bogey and Bacall or Bogey and Bergman and this is their “As Time Goes By.” Why the commissioner was there and how they all relate is not explained and somehow I like it far better this way. It foregoes realism and logical exposition for something of a far more tantalizing nature. Their scenes together are surprisingly few and yet little feels wasted.

There is a robbery to be solved and accordingly, the accomplices reconvene in an art museum to make their plans — including what to do about their compatriot currently sitting beleaguered in a clinic. However, the film’s most intriguing interplay has some roots in the traditions of Double Indemnity, where the criminal element is sometimes too near — too closely entwined — for you to even see them right next to you.

A kind of unspoken kinship forms between Delon and Richard Crenna, who, aside from the dubbing, fits relatively seamlessly into this picture. Again, it comes down to representing alternate sides of the same coin.

We might also consider Deneuve vaguely coming out of the imprint of Phyllis Dietrichson, playing the men, stuck on her, like pawns. And yet it could merely be the wordless spell she casts, but we almost are drawn to believe she does love them both. Again, the words are never put to it so no easy answers are ever arrived at. Everything is conjecture.

For all intents and purposes, the majority, or at least long stretches, of Un Flic are silent cinema, and it’s easy to appreciate them. The most fascinating criminals or often defined not by word so much as deed. Whereas the opening job is done in quick and efficient strokes, the second effort involving helicopters, trains, and elaborate inner workings, is a far more intricate, far more methodical endeavor. Melville seems to relish the mechanisms of the criminal most of all.

The perils of Un Flic are not unwarranted. It develops a razor-thin dichotomy between romanticized cops-and-robber tactics and this underlying toxicity. Guns at one time stylish, as a token of machismo, are also exponentially deadly. Men exist duplicitously as both handsome rogues and cold-hearted cads, backhanding the weak who get in their way. Friends and lovers are won and lost in a glance and the blink of a moment.

It’s a social tradition out of a different era, which is true. Of course, in retrospect, we must take the bad with the good. It would be Melville’s last film in a truncated, albeit stellar career. But one cannot help and still find something mystifying even a tad alluring about the world he accentuates. Where his style feeds into his characters and back again in this self-perpetuating ecosystem. Ultimately, what’s presented is a fatalistic form of masculinity. There is no more pertinent analysis of France’s foremost noir auteur.

2 thoughts on “Un Flic (1972) and Fatalistic Forms of Masculinity”