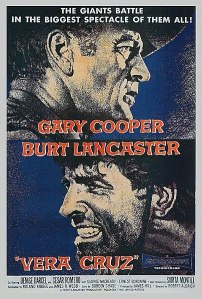 Below the Mexican border, during Antebellum days, a diverse array of Americans find themselves in the middle of the fight against Maximillian of France. Vera Cruz is far from a history lesson, however. It need not be. Still, it plays as an important footnote in a different type of history altogether, that of the classic western genre in a current state of evolution, jutting ahead into the 60s.

The script is not always phenomenal, but what it does have is an Aldrich-like penchant for the cynicism of noir. It starts to make even more sense when you consider Borden Chase’s pedigree: a fine row of Anthony Mann westerns. And yet the good sense of amusement overshadows everything else. This is how it still manages to remain a product of the 50s (which isn’t necessarily bad).

Its other readily available and beneficial assets are star power: the pairing of Gary Cooper and Burt Lancaster fits the bill. Then, the on-location shooting does so much to elevate the environmental credibility. There is no other way to make this picture feel truly robust aside from actually finding your way down to Mexico. It’s not that it’s a wholly authentic experience, but at least something in these locales breathes of some form of reality.

Lancaster has the beefier, more intriguing part as Joe Erin, but Gary Cooper (Ben Trane) is able to bring his even-keeled strength to a new generation of westerns, and it serves the picture splendidly. It’s paramount that the two stars act as the utter antitheses of one another while still managing to be opposite sides of the same archetype.

Their garbs still plant them squarely in the traditions of olds, Cooper in the light colors of an undisputed hero and Lancaster game to wear the pitch-black clothes of a two-bit bandit, who would shoot a man in the back and hold children hostage.

Due to Coop’s presence, I couldn’t help but feel Vera Cruz is somehow reminiscent of the adventure films of old like Lives of a Bengal Lancer. There is a similar sense of camaraderie here and our main characters are able to blow through their mission on their own personal valor, even as the locals only purpose seems to be that of collateral damage.

As hinted at before, Vera Cruz is also an early forerunner to a future generation of westerns, all but losing the luster of the mythologized west for something grittier, more graphic, and in some ways, more stylized.

This is the lineage that will lead us to The Magnificent Seven, Sergio Leone, and The Wild Bunch Et al. The presence of Charles Bronson and Ernest Borgnine in a pair of minor thuggish roles are a convenient nod to their future counterparts. For that matter, even Jack Elam would get into Once Upon a Time in the West.

The picture can generally be characterized by two distinct tones: giddy in one moment and equally tense and unsentimental in the next. If you mentally draw up any partnerships or rivalries in the picture, you’re probably apt to see it. It’s incredibly fluid. This precedent is effectively established when Erin growls at his pack of thugs that they aren’t even his friends. Instead of ganging up on Trane, he welcomes him aboard into their merry company.

In other words, he doesn’t show favoritism, nor does he harbor any kind of sentimentality. It’s both an asset and a curse. Always game for a new gun to come around, but equally intent upon looking after number one. His sole allegiance is to himself.

In their attempts to sell themselves out as mercenaries in the Franco-Mexican War — potentially to Marquis Henri de Labordere (Cesar Romero) — they find themselves trapped. Rebels poke their heads over the side of mission walls, guns pointed menacingly down on them.

One must only dip back into the memory bank to remember a similar visual in Butch Cassidy. But of course, in this picture Coop is still infallible and by most accounts, indestructible. Talking his way out of predicament with casual diplomacy and whipping out his six-shooter only upon provocation. He’s entered the grimy, blood-spattered world full of its ambiguous tones, and yet he still remains stalwart. One of the last remaining bastions of the archetypal western hero.

If anything, Vera Cruz signals the decline of his reign over the West, even as it manages to have a wagon full of fun. They show their prowess with a Winchester rifle in the courts of Emperor Maximillian, only to be entrusted with a tenuous mission to escort a Countess (Denise Darcel) to Veracruz. Their valuable cargo winds up being more precious than they first envisioned when they discover it’s loaded up with gold bullion.

The gold becomes the driving force worthy of all sorts of double-crosses and easily rearranged allegiances. There are those driven by greed, others who want the kingdom, and still others, the most noble of all, who want to return the nation to its rightful rulers.

In this last act, the patriotic Juarista and the French forces face off with all the fervor you can imagine. The editing feels surprisingly quick for a day and age when breaking 10 seconds on an individual shot was not altogether uncommon.

Aldrich, in his first big production, fused with the talents of cinematographer Ernest Laszlo, boasts a picture with a lot of frenetic energy to offer. It is an imperfect, at times, disjointed effort, but it willingly takes hold of the bridle and rides the story to a worthwhile conclusion.

There are ample visually striking moments to reference, from a column of men on horseback fleeing across the plains and then, in the climactic moments, gattling guns rattling the terrain with bullets. Cannon volleys follow in earnest as a charging onslaught of men look to take the Bastille, as it were. Clouds of gunpowder and smoke hang in the already dusty air.

This is purely on the macro level. Overlaid with Erin’s relentless ambitions to acquire the gold for his own, and Trane looking to do anything in his power to keep him at bay. It comes down to the fated face-off, all but bubbling under the surface from the first time they ever laid eyes on one another. Do you really need to guess the outcome? See it for yourself.

The final emblematic images are of a ravaged battleground strewn with dead bodies. Widows and orphans scurrying to find loved ones and survey the damage. Who ends up with the gold at this point feels inconsequential. The conclusions drawn might as well be the cataclysmic effects of avarice and war. Though Vera Cruz has enough wherewithal to manage a decently good time going about it. This might be an unfeeling observation to make but, once again, it also remains a fitting portent for the future.