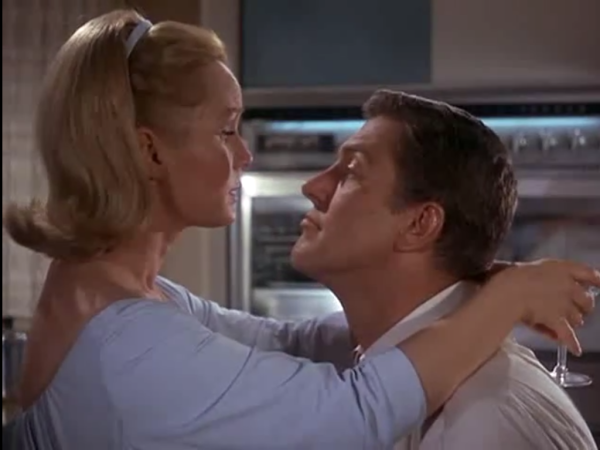 Divorce American Style starts out as a symphony of marital nagging, and it looks to build off this cacophony to make some sense of the current state of affairs in 1960s America. While the title doesn’t capture the same milieu of its Italian counterpart, it fits for a plethora of other reasons. It’s satire in the American mode and Norman Lear, who would become renowned for his brand of socially conscious comedy, is hard at work. In order to go about it, he hones in on one couple in particular: Richard and Barbara Harmon.

Off the top, it’s an important distinction to make. Creatively, it seems like a stroke of genius to cast Dick Van Dyke and Debbie Reynolds as this bickering couple slowly tearing apart at the seams. I say this purely from the likability factor. Their entire career trajectory thus far from sunshiny MGM musicals to crowd-pleasing family sitcoms all banks on their likability quotient.

Here is a picture that tests all of that built-up reservoir of goodwill and fuzzy feelings we have for them. If you only accept them as the picture of Cathy Seldon in Singing in the Rain or Rob Petrie in Dick Van Dyke, there’s a reason to vehemently oppose what Lear has done with them here.

While it’s not my favorite pastime to see two such actors put each other through such hell, some part of me understands why they wanted to take a stab at it. Because it’s not safe, and it challenges the status quo and how we accept them as performers. To their credit, in stretching themselves, it’s an attempt to get past one-note characterizations.

True to form, their first full scene starts with a fight. It’s postponed due to the party they are throwing only to reconvene after all the friends have shuffled out the front door. They can drop the veneer and all pretense is cast off again.

She bemoans the fact he’s critical of everything, and he just doesn’t understand her anymore. He’s frustrated that when they finally get some of the things they always dreamed about, his wife seemed to turn unhappy, and he can’t figure it out. It was another picture from 1967 that famously acknowledged a failure to communicate. This one gives it a whole new domestic context.

We see their bedtime rituals and there’s something almost mechanical to them because there’s no intimacy between them even in this highly intimate space as they open cupboards, plug in razors, and do their bits of business…without a word and still somehow in perfect cadence.

By day, Barbara continues seeing a psychologist and Richard begrudgingly gives it a try, although he’s uncomfortable sharing his feelings with a stranger; the way he was brought up it just isn’t done. If we wanted to add something else to their marital complications, it’s their kids. Normally, their two boys would be trapped in the middle, but there’s a pollyanna-like understanding about them. They are so easy-going and well-adjusted as their own parents continue to go down the tubes.

One call to a lawyer and all of a sudden it’s like the trip wires have been set off on both sides. There are trips to joint bank accounts and friends on both sides supply their two cents worth, not to mention their respective legal counsel. It’s not a new phenomenon, but we are reminded how these things can escalate; this is divorce taken to outrageous proportions.

They sit at a table in the law office as their lawyers casually settle their case, mixing in chit-chat about their latest golf games and shared business associates. Then, Richard is taken under the wing of Nelson (Jason Robards), a fellow divorcee, who gives him advice about alimony and how to survive. His life is fairly abysmal and pretty soon Richard is going down the same path moving into his new digs and trying to find romantic direction.

Meanwhile, Barbara tries to make her own way with an oft-married family man (Tom Bosley), getting to know all his children. It devolves into another madcap orchestration, reminiscent of the opening prelude. This time we have the notes of parents and step-parents, kids and step-kids all being assembled for a day out.

With the robust cast, it’s rather curious the film was not better known in its day because it gradually introduces other familiar faces including Joe Flynn, Lee Grant, Robards, Jean Simmons, and Van Johnson.

In the epochal year of 66-67, it does make sense Divorce American Style never received the same plaudits as Whose Afraid of Virginia Woolf, The Graduate or Two for the Road. If not altogether a sitcom episode, it’s the American counterpart to its more high profile continental brethren starring Audrey Hepburn and Albert Finney.

Again, there is the sense of the middle-class malaise where things and stuff and cars are in one sense inconsequential compared to the relationship. And yet they mean everything when it comes to comfort and status. 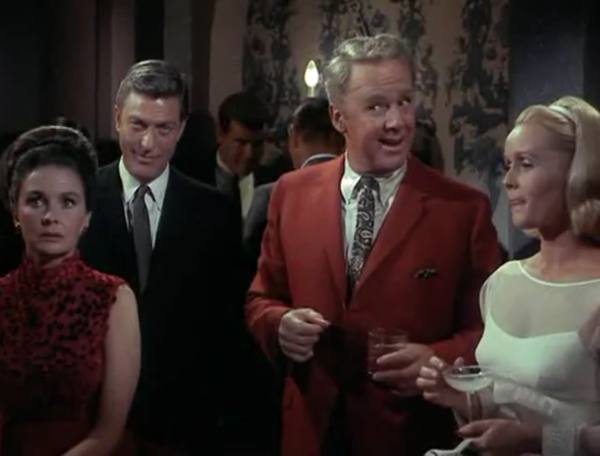 To the very last frame, there’s something subversive about seeing sweet Debbie Reynolds and lovable Dyke Van Dyke as divorcees with a marriage hitting the skids. But if this is true, there might also be a kind of catharsis for Reynolds when a hypnotist puts her under on a stage in front of a whole host of people. She’s been through so much and there she is throwing off the shackles of all our preconceived notions. She heads off stage and goes to give Van Dyke a big ol’ kiss, effectively rekindling their romance.

The film hasn’t aged particularly well, but then again, what better way for it to remain as a testament to the social mores of the times and the prevalent anxieties? It’s probably better for it. Because all the fracturing, recoupling, and suburbanization of society definitely created a new kind of landscape.

It’s all there in the later scenes as all the stars couple up uneasily. Van Dyke is with Simmons who was Robards’s former spouse. He’s trying to marry her off so the alimony doesn’t break his back. Then, Robards and Simmons try and set up Reynolds with Johnson — a genial used car salesman — because that makes Van Dyke even more unattached.

I tried to make this all needlessly convoluted but hopefully, the point has been made. Love is strange. Love is messy. Love is complicated. If that’s true of love American style, then it’s true of divorce even more so.