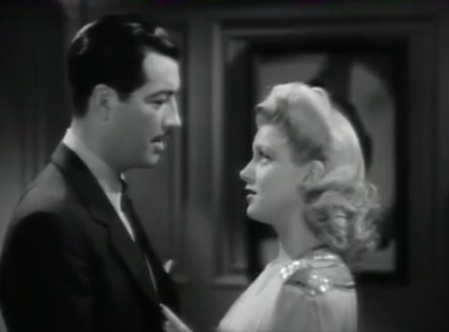 “Are you thinking of allowing her to play Roxanne to your Cyrano?” – Van Hefflin to Robert Taylor

Pretty faces don’t always add up to a quality movie and if you want to find where the faults lie, you might look between the players and the script then split the difference. Johnny Eager has all the Classic Hollywood trappings that very well could have made it dead on arrival — especially years later.

Because our protagonist has a name that only exists in the movies (or Hollywood for that matter). He’s a gangster from the old days formerly clad in the finest of threads and raking in the dough. To this day, he’s unrepentant or at least blatantly honest about how he feels; he’s no chump, even despite a stint he did behind bars.

Now he’s on the outside on parole making a go at propriety as a cabby. After this preliminary bit of eye-opening exposition, the story has all but telegraphed its intentions, really no fault of its own. It doesn’t take much imagination to put a reformed Robert Taylor and a curious young sociology debutant like Lana Turner together.

They meet through his parole officer: a white-haired, benevolent picture of authority. He seems to believe every man is capable of reform and human goodness if only given a chance. His secretary, on the other hand, gives Johnny the stink eye. Lisbeth Bard can hardly take her eyes off of him.

Of course, none of this is on the level because Johnny is busy getting into his old rackets, including an ambitious plan to resurrect the Alongonquin dog races to make a killing out of it. Simultaneously, he’s double-dealing, getting his sister and bratty niece to masquerade as his alibi. They’re nicely compensated of course to play up a squeaky clean picture of domesticity.

One has to laugh. The authorities must be idiots and Johnny accordingly plays them for fools. He’s a modern-day Machiavelli and this combination of authority, guile, strength, and charm makes Johnny Eager come off a bit more significant than a walking caricature.

It’s true Taylor had caught ahold of something in his career and whether or not he was considered a negligent actor and merely a pretty face, he brings a definite machismo to the screen more than capable of knocking off everyone else around him. He’s without a doubt the center of the action despite the plethora of scene stealers around him.

But one cannot forget the diffident school girl played by Turner, quoting Cyrano de Bergerac and sporting a hat to beat them all. What overtakes her exactly? Is it some compulsion to flirt to convert a wayward soul? Is it simply yearning passion? Whatever the reason, the film is full of “inamorata” — men and women lovers.

Not least among them is Van Hefflin who’s quite the educated fellow, quick and rich on the prose, especially when he’s soused with liquor. Jeb is Johnny’s most faithful friend for reasons the movie never puts to words. But whereas everyone else is either a hired ally, a paid stooge, or an easy rival, Jeb stays by him because he has no one else.

The film is at its most engaging tracing the lines and mixing its reference points between literate dames and men pontificating with a grandiloquent verbosity while the thugs rattle off their own barb-wire jargon prickling the ears. They tumble around inside the head as the most unrealistic and simultaneously peculiar cocktail of discordant voices.

Hefflin does very little compared to the other forthcoming gruff, garble-mouthed, shifty-eyed types, and yet he doesn’t need to because the words flowing off his lips play like riffs off the rest of the film. He seems to relish every soliloquy he gets to run off, and it definitely leaves an overall impression.

But the real fire is between Taylor and Turner for as long as they get on screen together. Aside from Johnny’s clandestine activity, Lisbeth Bard’s step-father happens to be a crucial man. Edward Arnold aptly plays the domineering and vengeful district attorney, who just so happens to be situated in the most convenient place in the movie. He helped put Eager away in the penitentiary as a service to the public. Now Johnny’s looking to stick it to him with Lisbeth implicated in his own crimes.

Could it be he never loved her at all? It always functioned as business over love? Regardless of his motives, enemies become accomplices as he leverages his new position to open up the long-dormant dog racing track. Everyone across the board has got an angle. What sets Johnny apart is his self-serving shrewdness, never blinded by sentimentalities such as sacrificial love, grace, or a guilty conscience.

Meanwhile, Lisabeth is overtaken by mental frailty and paranoia. She’s not bred for the cutthroat gangster’s life like Johnny. Her tragic hysteria forces him into a type of hero’s choice. It’s what all Hollywood movies ask of their protagonists. Something is required of them in the end.

In its day, Johnny Eager was a stirling success, and if history is any indication, it might have one of the most tragic days in American history to thank. It premiered in Los Angeles on December 9th, 1941. For those keeping tabs, this is two days after Pearl Harbor.

It heightens the dramatics just enough to bring out of the realm of reality and into the spaces of escapism. Where illicit romance can shoot off like fireworks on the screen between two scintillating specimens like Taylor and Turner. They were TNT as the contemporary advertisements so aptly framed it. They were the eye candy; they were the distraction to take the masses away from the tragedy right outside those cinema doors.

In a short time, the movies would be acting as a comment on the world at-large and the war at-large with propaganda machines spinning on all cylinders. For now, they still act as a counterpoint saying something about the state of a nation by not saying anything at all.

The story ends in a somewhat comforting manner, ultimately capping off with a Hollywood moralism that made sense, creating heroes out of gangsters far away from the chaos of sneak attacks and brazen days of infamy. It just goes to show life is more ambiguous and thus more complex than a movie.