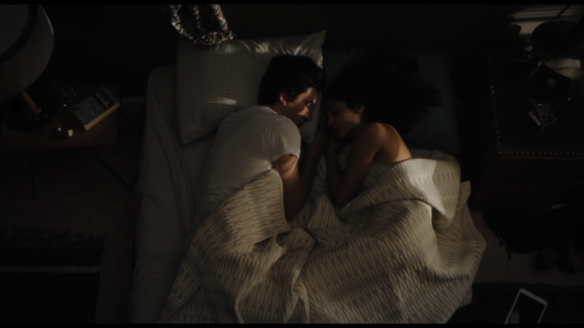 This sincere pronouncement comes from a young girl — a fellow poet — as she leaves to go off with her mother and sister. She leaves behind Paterson (Adam Driver), a pensive bus driver, sitting on the brick wall, having gifted him one of her poems. Theirs is an instant connection. One of appreciation for observation, for words, for beauty.

Paterson is ripe with moments like this ambushing us with an understated resonance. Scenes of kindred spirits seeking each other out and finding some meaningful common denominator that they can relish together.

Jim Jarmusch feels like a man born of a different era — the last bastion of the old way. There are other directors who are older and more storied like Martin Scorsese or Clint Eastwood perhaps, but he is learned and the disciple of some of the great cinematic artists of the 20th century. We’re talking about titans as diverse as Robert Bresson, Nicholas Ray, and Sam Fuller.

He understands space and framing, how they define a composition. He’s not afraid of time or silence and how they can build into something revelatory. Normally, his creations might be defined as off-kilter and individual. He was very much at the epicenter of the indie film movement that revamped in the 80s. In fact, the true glory of Paterson is how pedestrian and how plain, how ordinary, and how pleasant it feels.

It’s actually not Emily Dickinson but William Carlos Williams who is Paterson’s favorite poet. There’s a self-reflexive nature to it. I know little about Williams work aside from the fact he has an epic poem called “Paterson.” And it’s true our story takes place in Paterson, New Jersey, where our main character acts as a stand-in for the town (and the poem) he shares a name with.

It’s an observational film just as Paterson is a man who watches the world passing by, existing all around him, as he drives his usual route. He is not someone the world normally esteems as an artist; he is a humble blue-collar poet. He fills up his days listening to conversations about Hurricane Carter or between a pair of high school anarchists (a nod to Wes Anderson’s youthful lovers in Moonrise Kingdom).

There’s not an antagonistic bone in the man’s body, and the movie happens to deliver a particularly warm portrait of marriage. As he spends his days working and nights tucked away writing or walking the dog, his wife (Golshifteh Farahani in a marvelous piece of casting) is swept up by dreams of cupcakes and country singing, even as she supports his writing. She is both the antithesis and the utter complement to Adam Driver.

Laura coaxes him to share his work and get it out so people can enjoy it as much as she does. Her palette and interior decorating are dominated by black and white, and she revels in her side hustles. Whether or not she becomes some great culinary or country music star seems immaterial. Paterson gently reciprocates the encouragement abounding in their household and what remains are modest joys.

The story is not beholden to typical structures of narrative. Although it does have something in common with the creation poetry of Genesis, working in the rhythms of the week in an unflustered, unhurried manner. There’s a tranquility to it all, displaying the innate power of habit and routine

Like clockwork, he goes out to walk the dog, a bothered bulldog named Marvin. We never ask to know why he does it. It’s become a kind of established fact. Just as the nightly stop at the bar to chew the fat happens. The conversations cover local heroes like Sam & Dave or Lou Costello. It feels inconsequential but somehow pertinent to the kind of syntax and meter the story is looking to evoke.

The poems read throughout the movie by Adam Driver in a deliberate, partially stunted diction are much the same, exhibiting this kind of straightforward, no-frills lucidity. He rehashes and molds them methodically before jotting them down in his hidden notebook. In fact, they are penned by Ron Padgett, a writer deeply admired by Jarmusch himself.

As someone who has dabbled in the art, you respect people who are brazen enough to become untethered from something so comforting as rhyme. Because rhyme gives you some sense that you are creating something beyond prose. It takes a braver, more audacious soul to strip it down and make it so closely reminiscent of normal everyday language and yet articulated and manipulated just enough that there is no recourse but to call it poetry.

Likewise, the dialogue throughout the movie is not realistic in nature. The words feel specifically chosen — very particular — not always right or real but given to their own cadence. There’s something so refreshing and freeing about it because it allows us to live our lives and feel they have meaning and significance in their very ordinariness.

Akin to the security guard in Museum Hours, here is a man living for more than a paycheck, and they both seem to see beyond the normal things that distract us — to somehow come to terms with beauty in the most extraordinary of places. And by this, I actually mean the ordinary places where others fail to look or cannot see.

I realized halfway through, Paterson has no cell phone; it’s part of what plants him into an altogether different era and makes him feel like a man Jarmusch might admire and heartily identify with. He lives a simpler, some might say, purer life without white noise and distractions.

However implausible, the moment that feels like a climax truly does burn deep, speaking as someone who has devoted a lot of time to writing — much of it unseen by the external world. To lose your work is a horrifying thought, but it also serves as a reality check.

It’s not so much devoting time to writing but having enjoyed the process — being able to uncover and appreciate and put words to what you have been so privileged to experience as a living, breathing human being. If we write and create merely to be remembered, it will never satiate. How much more can we relish the process if we enjoy every rhythm?

Because it’s exactly that: a process. As another character who traverses a tough world of his own admits to Paterson, “The sun still rises every day and sets every evening. Always another day.” It’s inevitable and a bit of a final exhortation — to Paterson and to all of us.

The final scene is the kind of cinematic loveliness you find in a certain brand of movie — the Museum Hours and the Columbuses of the world. Where there are interactions that are amicable, pensive, and beautiful.

They need not be rife with conflict or gargantuan stakes. They are found compelling for the mere fact they drink deeply of the wells of mankind and speak to who we are as people. Crossing cultures and borders and time and space to fuse human beings together.
It could be art, it could be architecture, it could simply be the need for human contact.

Here it’s poetry. A Japanese sojourner (Masatoshi Nagase) sits down at a bench with Paterson, and they share what can only be described as a moment — albeit a cinematic one — and it’s exquisite in all its unadorned subtleties.

We need one another and we can light the fire under others providing inspiration, hope, and subtle encouragement. Far from entertaining angels unawares, it might just as easily be that we can give a lift to a burgeoning artist or at the very least an unassuming one.

If nothing else, Paterson is a stirring reminder and a quiet call to appreciate and cultivate the beauty around us. We are in it together. Art need not always be a profession. Sometimes it fills the spaces in between bleeding out of people’s lives because they know no other way. They cook for sheer passion. They play music because they have to. They write out of some otherworldly compulsion.

This is art at its most elemental form, and we are all better for it. Paterson reminds us about the rhythms of life and how everyday ordinariness can be magnificent and more than worthy of our creative energies.