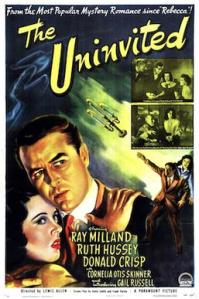 To place my cards on the table, next to the ouija boards and ghost catchers, I’m not always fond of haunted house movies because how many truly original iterations can you have out of one premise? Granted, there are lots of houses in the world, but how do you make each one stand out among the crowd? If it’s not obvious already I’m already originating from a place of skepticism and apathy. There you have it.

There is some good news. Although The Uninvited won’t exactly make a convert out of me, it is freed up by the fact it was the instigator of many of the archetypes the genre holds onto even to this day. Since this is a movie from the 1940s, the onus is not on the picture to be pop-out scary; instead, it uses its assets of music, mood, and atmosphere to project an inedible impression.

The brother-sister relationship between Ray Milland and Ruth Hussey on the screen is not so common in movies, and you could easily see them playing romantic partners in another movie. The novelty is agreeable enough as they gayly happen upon an old house in Cornwall that they are just thrilled to see since it reminds them of warm childhood memories.

So they walk in of their own accord — their yippy dog scurrying after a squirrel in a fairly spectacular bit of choreography — waltzing around the place just as if they own the place. They have no misgivings until they walk up to an eery room overlooking the cliffside. Just being there makes them heavy and already we have a portent of things to come.

As it turns out, the siblings get an opportunity to buy Windward House and at a real steal too. The owner, a somber commander named Beech (Donald Crisp), is more than happy to get rid of it even as his earnest granddaughter (Gail Russell) can’t bear to see the place leave their possession. You might say she has an attachment, even a compulsion to be there. The old man goes so far as to say the house is filled with malignity against the girl.

Still, brother and sister get their wish, moving in, setting up their housekeeper, and trying to get acclimated. What the sibling dynamic does tease out are other romantic interests. Roderick, for one, is fascinated by the “sleeping beauty magic” about the girl Stella, even as they got off on a bit of a wrong foot.

When they finally do make amends, there’s a conviviality born between them. As a musician and one-time music critic, he plays her quite the tribute: none other than “Stella by Starlight.” It’s an immortal tune, and it also, coincidentally, was composed by Victor Young just for this picture. It becomes a haunting song of lament and romance on par with the entrancing theme from Laura also released the same year. It’s yet another case of music having such a mesmerizing grip on a movie.

If the aura around Laura is one adaptable touchstone, another closely related one is the unnerving ambiance of Rebecca. Daphne du Maurier’s novel, turned into the well-remembered Hitchcock drama, played with this same spectral sense of the otherwordly. The house, Manderley, became a character in its own right, and the deceased first Mrs. De Winter effectively made it into her eternal haunt. As an embodiment of obsessive devotion, Mrs. Danvers played so forebodingly by Judith Anderson, knows few equals.

Much of The Uninvited is about set-up and even the delay tactics bringing us to the point of release. It rarely confronts us only inhabiting the corners and peripheries of the story and milking Charles Lang’s delicious cinematography for every drop of darkness it’s worth. It has a lot to offer.

For instance, there are wailing and moaning noises in the middle of the night. Word of some apparition. Smells of mimosa that flood the air on other occasions. At a later date, their housekeeper raves about a crawling mist upstairs. It’s all very peculiar.

Alan Napier comes into the story as a voice of refined observation — a local physician who partners with them. He effectively brings clarity to the situation by disclosing some of the local history. You see, Stella’s mother died on the edge of the cliffs many years before under tragic circumstances.

If anything, it gives the Fitzgeralds more reason to worry about Stella’s well-being. They somehow decide the best option is to face the spirit head-on with a seance. It’s taken for granted that something exists; this is not a total figment of their overactive imaginations.

And it’s true, something fills up the room. There’s a look in the girl’s eyes of terrible happiness, a possessed euphoria. She’s resolute throughout the entire film; if they destroy that house, they’ll be destroying her. In some unexplainable way, it is a sanctuary for her.

Ultimately, the captain sends her away to a sanitarium run by a local plaster saint, Miss Holloway. Her reputation proceeds her; she’s renowned around town for her charity and stately benevolence. However, up close and personal, it’s only too evident there’s something suspect about her. She obviously still harbors a deep affection for the deceased Mrs. Meredith, championing her memory for future generations. It lends the movie yet another level of subtext.

From thenceforward we deal in ghosts, twists of exposition, and jumps in internal logic that must be parsed through. I’m often not a stickler for plot details, but it felt like The Uninvited ultimately relies on them too much. There are some genuine instances of dread or at the very least intrigue, but I’m more enamored with the Lauras and Rebeccas of the world. Their mystery manages to linger over me.

With The Uninvited my greatest takeaway was “Stella by Starlight” and the starring turn for Gail Russell. She, of course, would remain a bright hopeful in Hollywood for a few more years until alcoholism crippled her career and her personal life. However, within the frames of this movie, she is still brimming with the buoyancy of youth. It’s a pleasure to see her in such a place. If nothing else, I consider this a victory. “Stella by Starlight” might as well be a eulogy to a shooting star that burned out far too quickly.