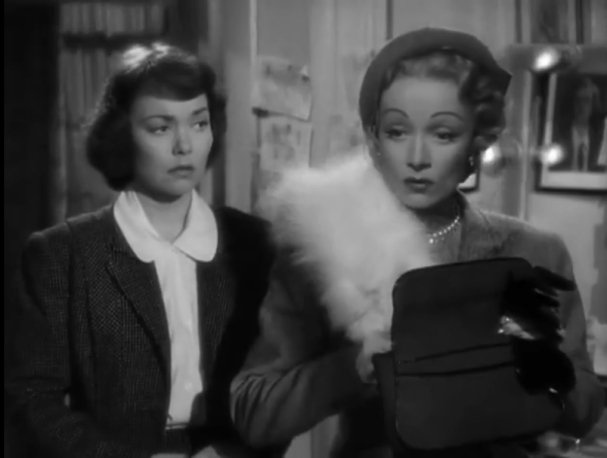 It’s true that “All the world’s a stage, and all the men and women merely players.” However, dress it up with murder and life becomes a series of stages and varying performances you’re putting on for different audiences — trying your best to play your audience — while not giving yourself away.

Stage Fright feels very much like Hitchcock getting back to his roots; there’s something simpler and yet still charming about the milieu he’s able to drum up evoking the British Isles. In reality, it was a convenient excuse to spend more time with his daughter Patricia currently away at school in the U.K. She even earned a small role. It’s also propitious he seems to be having good fun with the conceit: the combination of play-acting and murder with actors trying their hands at amateur sleuthing.

We are thrown into an almost instantaneous thriller. It dispenses with the lead-up altogether by showing a couple on the run in a car. A fledgling actress, Eve (Jane Wyman), is the complicit accomplice and Richard Todd is a man fleeing the authorities. Through an extensive flashback, he relates how he was pulled into the web of murder spun by his lover — the famed and gorgeous prima donna Charlotte Inwood (Marlene Dietrich).

He tries to touch up the crime scene she’s left behind only to get spooked by her maid turning up on the scene. The murder investigation commences in earnest including a respectable detective named Smith (Michael Wilding).

Eve sets the fugitive up with her father, out of harm’s way, before turning right around and hatching a plan to get to the bottom of the whole thing. One minute she’s trying to get close to the aforementioned policeman to somehow pump him for information with her damsel in distress act. The next moment, she’s putting her thespian training to good use posing as a cockney maid (and temporary replacement) for dame Charlotte herself.

It has some of the dynamics of an All About Eve between actresses though it’s admittedly hinging on cloak-and-dagger antics opposed to true backstage drama. Because it’s on this plane of performance that Hitch seems most intrigued — where acting becomes a conduit for understanding the mystery at the core of this movie.

If there were any undisputed secret weapon, my bet is up for Alistair Sim. He was always a mirthful co-conspirator if I’m to recall a movie like Green for Danger. He’s eminently likable, though the spark in his eye suggests he’s ever prone to mischief. This accords him all the prerequisites to play a fine father figure opposite Wyman if only for the primary reason they both seem to relish the game and being a part of it together.

They have the most instantly vibrant relationship within the picture, and they give it the comic underpinnings one comes to expect from the director. Sim himself meets the macabre of Hitchcock thanks to a bloodstained dress on a carnival doll used to shock Dietrich out of her performance of “La Vie en Rose.” It mirrors the ugly token of her secret transgression.

In another sequence, the wanted man shows up during her performance — a particularly saucy rendition of Cole Porter’s “The Laziest Gal in Town.” Before this interruption, the scene is pulled out of the Hitchcockian world momentarily. It’s an individual moment where an auteur like Hitch gets totally overpowered by Dietrich or, in many ways, he acquiesces allowing her to be her scintillating self in the golden limelight before the mechanisms of the plot are meant to take over once more.

Stage Fright feels perfectly comfortable being so theatrical. However, the ideas never feel fully wrought; it’s a bit scattered and inconceivable — nor is Jane Wyman the most compelling Hitchcock lead. Mind you, I’m not expecting her to be a Hitchcock blonde or Ingrid Bergman, but she’s not quite on par with even someone like Teresa Wright in Shadow of a Doubt.

Likewise, the theater finale is terribly abrupt though it functions on the tenets of many of Hitchcock’s grandest setpieces by taking a novel environment and turning it into a thrilling locale for drama (Donen would rehash a similar sequence in Charade). The scenes in the build-up are of all shapes and sizes as Wyman rather coincidentally juggles a double life. It’s all highly circumstantial.

As it turns out, the lynchpin scene is right at the very beginning. Of course, we don’t realize that until the end, but right there is Hitchcock’s point. To see it any other way is a mistake. Because obfuscation and chicanery are the building blocks of not only acting but murder as well. Perceptions can change so quickly, and he was one of the greats at visual audience manipulation. In Stage Fright he takes it a step further. He lies to us outright on the screen.