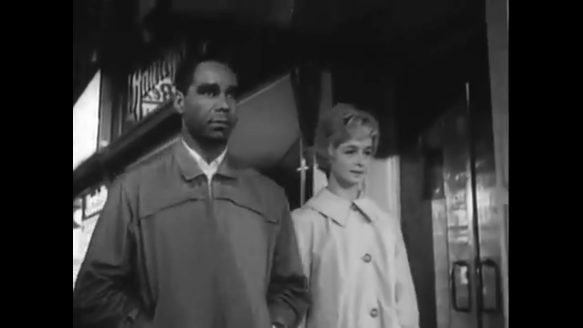 I was recently marveling how a theater actor I know predominantly from TV show appearances, William Redfield, could show up as an earlier incarnation of himself in an unorthodox film like The Connection. Then, about a week later, I had a similar revelation seeing Barney Miller’s wife, actress Barbara Barrie, doing something equally daring and landmark in One Potato, Two Potato.

Yes, it’s another black and white film of humble means, but it’s hardly short on ideas or purpose. Despite a childish title and production values that are a bit clunky around the edges, there’s still a fundamental sincerity to it in the tradition of something like Marty.

The very DNA of the picture is so fragile and tender, and yet it has a heart and exudes a kind of genuine candor capable of smoothing over a plethora of technical inadequacies. What I mean is that I like the movie — appreciate what it’s trying to do — and it feels bolder and braver than many of its contemporaries.

An all-knowing narrator helps bookend a story with court proceedings, but the crux of the matter must begin with Barbara Barrie and Bernie Hamilton. They meet in the carpool to work with their mutual friends, a pair of chatty lovebirds. Julie’s a white divorcee. Frank’s a black man who lives with his parents.

This is what the outside world sees, but in the movie, we watch how their temperaments meld as they are put in sharp relief with their friends. They gravitate to one another, not for some outlandish reason, but their simpatico and emotions are somehow attuned.

They have brief interactions. It’s tentative at first. There’s no intention on the part of either party. They have many walk-and-talks at night, quiet and pensive because they appreciate the company, and their demeanors are perfectly suited.

Then, in one of many grounding moments, maybe a policeman comes by, shining his lights on them, and ordering them away (what he sees as a black man and his prostitute). Either that or there’s some other sin of humanity, and they are shocked back to the debilitating frameworks that society has set up around them. These are blatant visual articulations, hardly subtle, and yet they acknowledge the prevailing cultural incongruities of the time: He’s angered; she thinks it’s funny, but together they must press on.

The resistance goes both ways because his own father (Robert Earl Jones) gives him a blatantly severe talking to. He brings up the questions of societal pressures and the prospect of kids: They’ll be outcasts, and it would be even worse to bring children into the world. 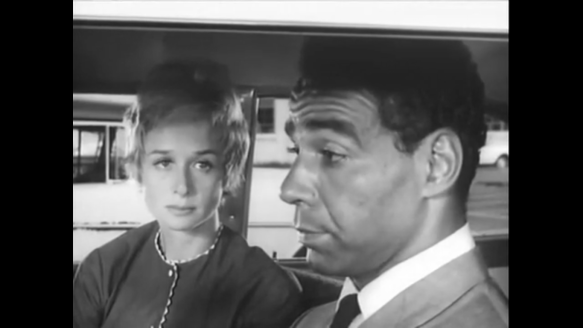 Frank almost buys it. He tells his beloved, “It won’t work.”

She responds, “What won’t work? Kindness and love?”

Yes, it’s true. The culture is entrenched with a deadly narrative of hate, riots, lynchings, and prejudice between their disparate people. But they want to push against this with their love. It’s all they can do.

In an earlier scene, after a friend’s wedding, they dance by lamplight, not like Astaire and Charisse in The Band Wagon, but like normal people would. Slowly and tentative, pressed up against one another. Instead, they play like a pair of kids with imaginary games of hopscotch and follow the leader. It’s a different kind of whimsical magic hearkening back to a world of possibility before children learn racism and are taught the limits placed against them by “reality.”

Their own wedding is punctuated not by joyous dancing and merrymaker but the jaundiced ire of a lady witness looking on in contempt. Because even if she’s not going to put a stop to it, we can read her face. She thinks this is repugnant, against nature or something. Her face is a canvas to reflect the peer pressure of an entire society. And it’s not the only one…

Julie’s ex-husband (Richard Mulligan) comes to visit his daughter after years away, and they have fun playing cowboys and shoot ’em up together. It’s another instance of play where the man is stripped of his responsibilities only for them to become firmly established again when he sees his estranged wife living in the home of a black man. He doesn’t want his daughter to somehow be sullied by such a sordid existence. One questions if it’s really for her well-being or his own reputation because people will talk.

It seems only realistic to encapsulate One Potato, Two Potato through the sum of its various sequences since it’s really a film of ellipsis as scripted by Orville H. Hampton and Raphael Hayes. Even when they feel a bit abrupt and unpolished, there’s an unparalleled potency to them because they speak into the moment like few films I’ve been aware of. What it lacks in fluidity, becomes bottled up in these perceptive moments that come to represent very specific even salient points of view and bits of trampled humanity.

Joe Cullen goes to a local preacher who admonishes him for wanting a God who has racial prejudice too. But God will not let him off that easy. His very commands adjure his people to “Love thy neighbor as thyself” without any kind of qualifying remarks or addendums. The man’s problem, along with so many cultural Christians, is reflected in their religion, which is such a self-serving construct rather than a way of life and relationship. 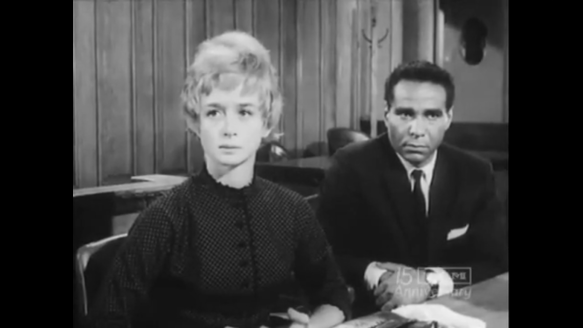 Then, the drama comes thick and fast. Julie confronts her former husband who still remains skeptical of her, full of outrage and insinuations (You talk about how he loves the girl, loves you, but can you love a black man?). And yet she remains resolute.

Frank feels successively beaten down as a husband, left emasculated and powerless because he cannot protect his wife based on the color of his skin. He goes to a college lawyer friend for help. He’s a jovial, accommodating fellow who grows scared and defensive when he learns about the parameters of the case. This is before Loving v. Virginia. Regardless of right or wrong, there is no legal precedent and a hot case like this could ruin him, and so he folds. Not because he’s a “bad person” but because he’s spineless and scared like you and me.

We stew in Frank’s powerlessness much like Ivan Dixon’s struggles in Nothing But a Man from the following year. They are kindred spirits. He gets some kind of catharsis by proxy watching the American Indians massacring the whites in the western at the drive-in theater. One can’t imagine he’s the first man to ever cheer for the other side even as he yells and shouts — slamming on his steering wheel.

The movie has an inevitable conclusion, if not an altogether just one. The judge (Harry Bellaver) makes a final decision predicated on economic viability rather than true measures of parental love and affection. It’s indicative of a culture that while acknowledging its fault lines — how a couple like that is made into social pariahs — nevertheless reinforces the status quo. Although it may be fictitious, this isn’t fanciful drama. It cries out with streams of all too apparent truth.

By the end, it feels like social horror, more heart-wrenching and harrowing than even something like Get Out because this was very real and no peppy nursery rhyme tune can wipe any of that devastation away. I still can’t believe this film. It feels like a small but mighty gem of a movie.