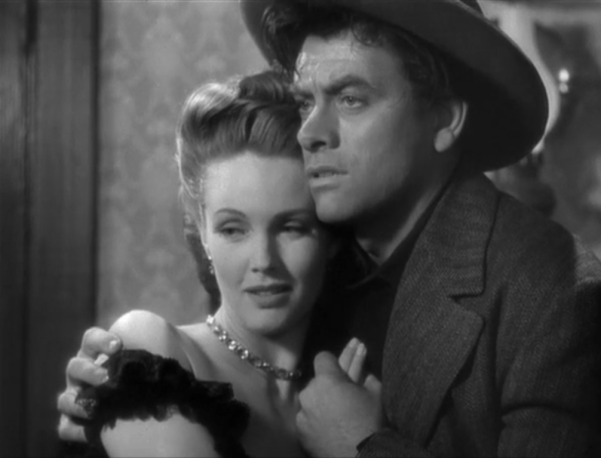 I Shot Jesse James is an off-center western as only Sam Fuller could possibly conceive it. At the very least it brings a journalistic eye and a shift in perspective. Because distilled down to its most basic elements, it’s a psychological character piece with John Ireland at the heart of it as Robert Ford: the man who shot Jesse James.

It’s not quite as punchy as Sammy Fuller would establish himself to be, but there is a slew of compelling ideas, and it’s not as straightforward as the western genre often suggests itself to be. Sure, the opening scene feels like quintessential Fuller, prepared to rap us over the head with the brunt of his movie. Bank robberies can never be easy; they’re always contentious. Guns drawn and bank tellers intent on sounding the alarm.

The picture is also about as noirish as they come out on the range — part of this is indebted to the conflicted character psychology — as expectations fluctuate wildly and scenarios happen not as we expect, but as they are meant to in a dismal landscape where everything comes out to its pessimistic worst.

People are poison to one another. The cruel hand of fate is inevitable. The lynchpin moment where a frankly, conventional Jesse James (Reed Hadley) is gunned down by his best friend is hardly imbued with the mythical glory the tabloids would have you believe. It’s almost matter-of-fact, totally unsentimental.

Fuller’s script acts as an examination of mythos and the pariah-like celebrity that engulfs the man. It makes for a far more perplexing exploration when you consider Jesse James died a hero — a Robin Hoodesque legend — while Ford is totally disgraced in society. He shot his best friend. If not for money, at least for a girl.

His desires are normal. He wants to get a ring so he can marry her and settle down. The question remains whether this kind of humdrum life is available to someone in his station.

The thematic ideas of legends on the range are dissected in many other westerns, and there’s always a sense of notoriety catching up with a protagonist. He has a target on his back. They might not have modern technology but papers, telegraph, and word of mouth have more pull than we might imagine. Word gets around and, if anything, legends grow larger with every town dispelling their own half-truths about the man and the myth.

Every gunshot potentially has Ford’s name on it. And yet he doesn’t want to give up his name. He’s too proud for that. He does take to the stage circuit reenacting how he shot Jesse James, and yet he can’t bring himself to pull the trigger. The audiences watch with a kind of morbid curiosity. It’s another nail in the coffin. Surely they comprehend this is simply one pitiful man shooting another — not some gargantuan duel of ruinous proportions.

In an equally telling interlude, Ford offers to trade a drink for a troubadour’s ballad and gets an ode to the coward Robert Ford who laid Jesse James in his grave sung back in his face. You can imagine his chagrin when he finds out he’s been memorialized in such a manner and then the jovial performer’s surprise when he learns he’s singing to the craven legend himself. 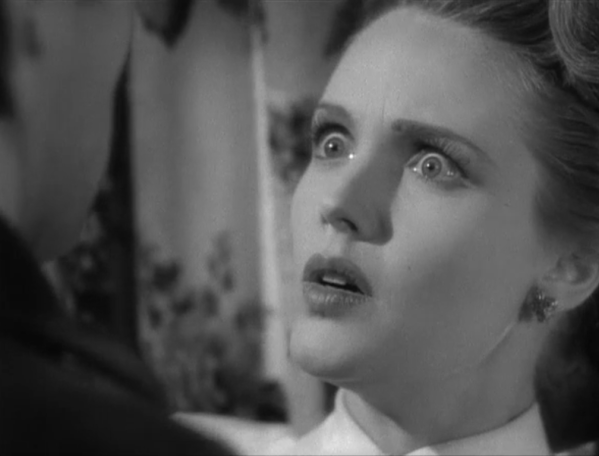 In a flat western, Barbara Britton’s part would be tepid. Here she gets at least two moments in close-up where her face comes alive with a crazed expression you don’t soon forget. It’s fit for a femme fatale, but she’s not evil or psychotic. At worst, she’s torn apart by love, and it’s a force she can’t cope with.

If Ford is still madly in love with her, there’s another character who drifts through and vies for her affections. Whether real or imagined, it doesn’t really matter. Ford has it in his head that the genial prospector, John Kelley (Preston Foster), is his bitter rival.

As mankind follows the trail of prospective wealth, both Ford and Kelley wind up in Colorado in the midst of a silver boon. For the time being, Cynthy is out of the picture. Far from fighting, they share a room, right neighborly.

The final act doesn’t feel much like a western at all. It’s shed all the traditions long ago. Again, it is a character piece. It could be any genre. This one just happens to be set around saloons and hotels, mining towns, and grubstakes.

But there are two men and one woman, and she can only end up with one of them. Perhaps she only actually really loves one of them. Frank James comes back into the story — you might remember him too — but he’s only another mechanism, like Wanted Dead or Alive posters or climactic showdowns between good and evil. Here they always carry the persistent inevitably we attribute to noir. There can only be one conclusion…

To the very last iota, it feels like textbook Fuller as he announces himself on the cinema landscape. On top of writing and directing the picture, he purportedly shot it over 10 days on rented sets from Republic Pictures. What’s most extraordinary is how the movie hardly seems to suffer from these constraints. If anything, it set a template for how Fuller would maintain a degree of creative autonomy while still managing to create a wide array of compelling projects in years to come.

Although his visual style would continue to grow and sharpen, there’s a killer instinct proving a lightning rod for stories. As a journalist and a journeyman, there’s this sense Fuller had the “don’t get it right, get it written” mentality. However, this very rarely seems to harm his output, which somehow always manages to find a worthwhile point of view to grab hold of.

I Shot Jesse James is little different. Its inadequacies often wind up making it all the more intriguing. You’ve never seen Jesse James spun in this manner, and way back in 1949 Fuller had a kind of prescience in suggesting where the West would go after the 1950s.