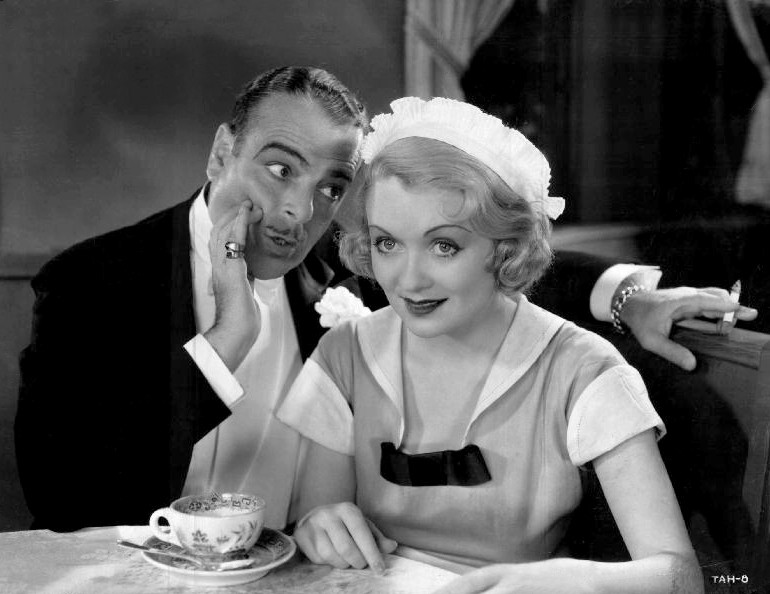 Here is a film so completely attuned to Hollywood celebrity and fandom in its heyday. We open on Hollywood fashion magazines full of stockings and lipstick, and glossies of Greta Garbo & Clark Gable. Then, Mary Evans (Constance Bennett) pushes her retractable bed into the wall to head off to her shift and our dramatic situation is made instantly identifiable.

She’s not there yet, but she has aspirations to be under the bright lights someday. For now, she frequents Hollywood haunts like the legendary Brown Derby, although she gets in by the back way — through the kitchen. You see, she’s a waitress there. She’s like so many bright-eyed starlets before and after her — even to this present day — looking for their big break.

In her case, it comes thanks to a veteran director, Max Carey, whom she waits on. Lowell Sherman is not altogether well-remembered today, but he has a smoky idiosyncratic charm about him playing well off Bennett’s vivacity.

He’s not quite the eccentric heights of late-period John Barrymore nor is he equal to the quipping suavity of William Powell, but his career is as remarkable as it was preempted. Not only was he an actor but also a director of such films as She Done Him Wrong and Morning Glory. This was before his sudden passing in 1934.

The fact that Hollywood always seems self-absorbed and preoccupied with its own mystique and inner workings actually bodes well for all those who desire a microscope to see how the industry actually functioned in the past. For this reason alone What Price Hollywood is a lark from the get-go.

Through her cajoling and giddy persistence, Mary gets her bit part, works tirelessly on her craft, and it gets notices. During the rushes, she’s made a contract player on the spot by the demonstrative Mr. Sax, who offers her a notorious 7-year contract. Far from feeling like a straight jacket, it seems to encapsulate her life’s ambition. She’s on cloud nine even as Carey looks on wryly, sunken down in his theater seat. He’s seen this film before.

You Ask Me! gossip column supplies juicy bits of exposition all throughout the movie charting the rise and fall of our stars. Mary begins her ascension in the industry even as Carey begins to falter. His films are over budget, he’s a bit temperamental, and his drinking problem has gone off the rails.

These are the obvious beats of melodrama, but in the hands of George Cukor, still an up-and-coming director exerting himself, the story is allowed to play like something more. There’s a lot of good-humored charm, but it’s not just about laughs. At the same time, because it leads with this kind of playful screwball sensibility, we never totally enter that perilous territory of overwrought melodrama. It feels quite light on its feet in all circumstances.

Mary has spunk flying out of her left and right, and it sees her straight to the top. Her first big picture gets her mixed up with a polo-playing playboy. Not only is Lonny Borden (Neil Hamilton) rich and dashingly handsome, but he’s also rather forthright. After setting up an extraordinary dinner, he’s not about to be stood up, and he pulls his date right out of bed to dine with our heroine kicking and screaming her way to a luxuriant dinner for two. What a lovely way it is to do romance, at least in the movies.

The revelations continue as we get to stand with the grips and the stagehands behind the scenes of the magical world of Classic Hollywood. When Bennett sings her French torch song and we see the camera coming toward her, the light nearby and the spotlights up above shining down, it offers such a delightful visual anatomy of a scene.

While not quite Casablanca, we are afforded a different kind of atmosphere. It gives it breadth outside the bounds of typical movie scenes because we are seeing both what’s in front of and behind the camera in equal measures. It also gives Cukor greater narrative freedom, and he can show us more as Mary’s personal and professional life bleed into one.

Although Max Carey and Lonny Borden never quite play as romantic rivals — the movie never aspires to be that kind of tripe — they do war for Mary’s affections because she has a soft spot for them both. The director and dear friend who got her into the business; the man who discovered her when she was a nobody, and then the other man who swept her off her feet.

What Price Hollywood?, like so many other such examinations, must chart both a shooting star and a falling star. Mary wins her Oscar. Max Carey is now an untouchable drunk with no place left in the business. Mary remains his only friend even as her marriage takes a nosedive, and she’s forced to soldier on as a single mother. She’s a highly successful mother but alone nonetheless.

In the final act, it looks like we might have spoken too soon. We’ve seen this melodrama coming from miles away. It’s embedded in the rhetorical evocation of the title. Mary is beside herself with the gossip and the baseless slander of the fickle journalist and viewing public. Now she only has one friend: the old softie Julius Saxe. The public will make you and break you. It’s true.

But the movie doesn’t end in the pits. This might be the key. Forget a sudden move to Paris that feels all too convenient or another all too expected happy ending. In some ways, it stays true to the overarching mood of the picture. At its best, it channels the effervescence of Constance Bennett and reminds us why she was one of the unsung comediennes, and one of the unsung talents, of the 1930s.