You half expect cinema to have remained dormant in wartorn Europe during the 1940s. That’s part of what makes Ossessione such a fascinating curio within this context. In fact, the film almost never made it out of the decade alive. One can only imagine how unpopular the picture might have been with the reigning government.

It doesn’t exactly preach good old-fashioned fascist values and Mussolini looked to exterminate the picture completely. Legend has it that Visconti, who had also joined the communist party, managed to salvage a copy so that his film debut could live on and he got out of the war as well with a sprawling career still to be determined ahead of him.

I learned only very recently that Visconti started out as an assistant on the films of Jean Renoir of all people. Not only does that seem like the most propitious of apprenticeships, but it’s also easy to trace the lineage of the Italian from the Poetic Realism of the French Master that would eventually coalesce into Italian Neorealism.

The films of Renoir and Michel Carne are fully present in this early work with the opening images of a train evoking something like Le Bete Humaine or Toni. Gino Costa (Massimo Girotti ) is the kind of working-class hero you’d expect in one of those earlier pictures or even some of John Ford’s work.

He’s an itinerant bum who used to be a soldier and then a mechanic in a former life. Now he’s hitched a ride on a truck bed only to be dumped outside a roadside tavern. And Visconti proceeds to introduce his primary couple through the visual synecdoche of two pairs of legs.

Finally, we see their faces together. They’re in a kitchen. Although Anna Magnani was originally meant to have the role, Clara Calamai channels the sultry come-hither coquettishness quite well even when it’s impossible to unsee the platinum blonde of Lana Turner in the part. But they have their own instant spark, like flint — burning with a consuming passion tantamount to spontaneous combustion.

If you’re well aware of the story already, she is a young woman married to a chubby misogynist named Bragana (Juan da Landa), who thinks he’s more than deserving of the marital comforts afforded by such a wife. He calls on her to rub him down after a long day, and she can’t bear to touch him. She has designs for someone else.

While her husband goes off with the local priest to do some duck hunting, in an early example of a bike-and-talk, Giovanna is quick to stoke the flames of romance with her much more desirable confidante. Visconti’s unauthorized rendition is purportedly more faithful to its source material although it’s hardly as streamlined as MGM’s later adaptation, essentially leaving more space for narrative asides.

When Giovanna clings to the security of her current life, Gino sets off on his own alone soon falling in with a hospitable street salesman, “The Spaniard,” who entertains the crowds. In what can only be expressed as noir sentiment, the tides of the narrative bring the couple together quite by chance.

Bragana is pleased to see their old friend and Gino gets pulled back into the whirlpool taking in some opera at a local tavern. This more than anything betrays Visconti’s affections for the stage.

Consequently, it’s also a film where arguably the biggest moments play out off-screen. I’m thinking of the illicit couples’ first rendezvous and then the fatal accident altering the course of the entire picture. Not all of this is due to content concerns either, but it does highlight how Visconti and his scripting compatriots, Mario Alicata, Giuseppe De Santis, and Gianni Puccini, conceived the story. 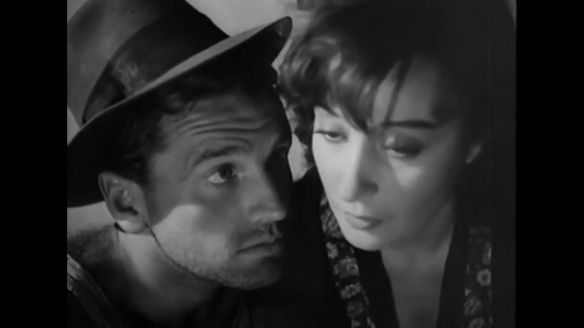 It offers another kind of dissonance because we don’t get to see what actually happened even if we’re well aware of their mutual intentions. We must wait for events to play out to see how the canker and unrest reveal themselves in due time. The most explicit response comes when Gino peels off  somebandages and then a violent struggle over a trinket ends in a passionate kiss. This might be the movie summed up in visual terms.

They must reckon with an unsettling state of limbo: freedom that feels more like purgatory as they stew in their infidelities. A man of the cloth suggests that they part ways because people do talk about their situation, real or imagined, and of course, it is very real.

Instead of detonating the story to be a full-blown melodrama like The Postman Always Rings Twice, Ossessione maintains these high levels of human intimacies. Gino reunites with his old pal again beyond delighted to see a familiar face, and yet it ends in fisticuffs because his fellow traveler is able to put words to everything he’s currently tormented by.

Then there’s a demure “ballerina.” Gino meets her knitting on a park bench, and they share an ice cream. I had to acclimate myself, thinking only momentarily that she was Giovana, but the emotions in the scene are enough to give this away. Because being around her Gino feels different; it’s as if, ironically, her purity is able to cover all his sins or at the very least help him forget them.

But the digressions only aid in leading him back to Giovana. If they aren’t totally a destructive pair, frolicking on the beach together, having rekindled their chemistry, then there’s some kind of fatalism that needs to be satiated.

In passing, Ossessione might earn the labels of Italian neorealism for its striking, ever austere imagery emblematic of the post-war working class. But it’s also often designated as film-noir for its sordid details and futile finale. However, I can’t stop but marvel at how Visconti was able to make the picture to begin with. Even after its initial release, it was hit with so many roadblocks of censorship and copyright problems only to gain a second life.

What an auspicious way to start a career, especially under such tumultuous circumstances. Much of the finest pieces of art are born out of the burnishing fires of the furnace and, for that matter, a certain level of creative obsession.