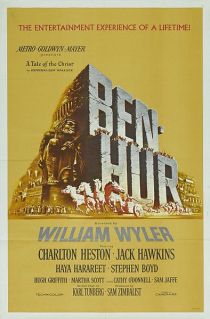 Ben Hur, directed by William Wyler and starring Charlton Heston, tells the tale of Christ in connection with the young nobleman-turned slave, Judah Ben Hur. We follow Hur as a friend turns against him and he and his mother and sister are imprisoned. Soon he is doomed to a life rowing on a galley but on the way there a kind , mysterious stranger gives him a drink to quench his thirst. It takes a few years but Hur’s fortune turns and he is no longer a slave but a great chariot racer. The time comes to seek revenge and he beats his former friend in the ultimate chariot race. However, his victory is shorlived since he learns his kin are now lepers and the man who showed him kindness years before is now to be crucified. Returning the favor, he gives the suffering man water before He is hung on the cross. Despite the man’s death, miraculously his mother and sister are freed from leprosy. This epic is monumental and tells a wonderful story intertwined with the Gospel.