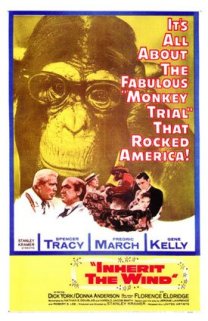 Starring two battling greats in Spencer Tracy and Frederic March, with Gene Kelly as well, the film chronicles a fictitious version of the controversial Scopes Monkey Trial which acted as an allegory for the McCarthy era. March is the prestigious prosecutor on the side of Creationism and Tracy is the famed defense attorney fighting for a young schoolteacher (Dick York). The two spar back and forth on the touchy subject while staying friends outside the courtroom. The whole town backs Brady, condemning Cates and Drummond as evil. However, despite all that is against them, Drumond saves the case by bringing Brady to the stand. The two stars have commendable performances if not their best. Gene Kelly proves he can be a serious actor, playing the cynical newspaper man. The cast is rounded out nicely by Harry Morgan and Claude Akins. Here Stanley Kramer puts together a respectable movie version of the stage play.