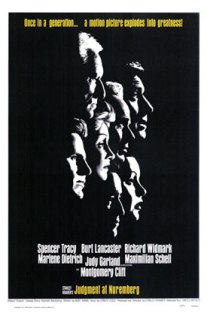 This epic court drama relates the true story of the War Crime Trials after World War II. With Stanley Kramer directing, this cast is amazing. Spencer Tracy, Burt Lancaster, Richard Widmark, Marlene Dietrich, Montgomery Clift, Judy Garland, Werner Klemperer, and even William Shatner all play a part. However, Maximillian Schell is by far the standout because he is such an amazing defender of his country’s honor throughout the entire film. He wants the Holocaust to be known and yet all the while he goes through the case with dignity even though the pressures are so great. For every intense moment the viewer is stuck in their seat and when the verdict comes it is hard to contain the emotion. This movie should be seen by all not only because it is great but it also chronicles an important event in history. Whatever happens we should never forget the events surrounding the Judgment at Nuremberg.