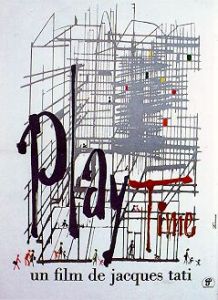 Starring and directed by Jacques Tati, this film is his most ambitious work yet. The film opens in a Parisian airport with droves of tourists. Then the audience ends up looking into an office high rise full of glass, cubicles, elevators, and escalators. All throughout we observe many characters including Mr. Hulot who seems strangely out of place in this modern, suburban city. He ends up at an international expo, visits a friend’s home in the evening, and then ends up taking part in the disastrous opening of a night club. Hulot becomes acquainted with an American tourist before she returns home from her Parisian adventure. At times this film is almost like a giant ballet, with often subtle humor, and a stream of events only connected by the characters they involve. The architecture picks up where Mon Oncle left off, the sets are on a grand scale, and even the clothing of  most of the people seem to fade into this world. This film is also international as well as universal because it is more about the image and sound than dialogue. After it all I was left with a satisfied smile. It may not be for everyone but for me personally it was a joy to watch.