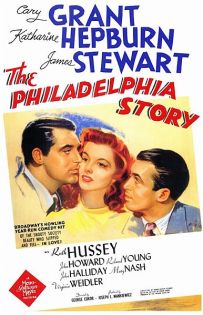 Headlined by Katharine Hepburn, Cary Grant, and Jimmy Stewart, The Philadelphia Story  tells a comical tale of a divorced socialite who is about to be remarried. Tracy Lord is an arrogant socialite who divorced her equally fiery husband C.K. Dexter Haven. Now it is the day before her wedding to another man. However, Haven returns and brings a long two magazine reporters to get a scoop they were forced into. After a lavish party and many drinks the reporter (Stewart) and Tracy Lord find themselves spending an inebriated night talking and swimming. Haven manipulates the situation and the future husband Kittridge, who catches the tail end, believes something bad is happening. The next morning the wedding is in jeopardy and Hepburn and Stewart are oblivious. Although nothing happened, Lord agrees to terminate the wedding and Mike (Stewart) tries to save her embarrassment by proposing marriage. However, she realizes it is not meant to be and goes to Haven while Mike returns to the camera woman who loves him. It all ends well but the joke is still on them in the end. This romantic comedy has a lot of star power and it is actually pretty good.