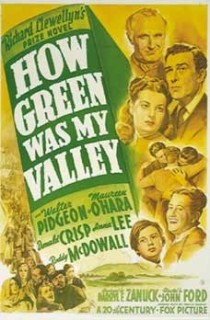 Starring a cast including Roddy McDowell, Walter Pidgeon, Maureen O’Hara, and Donald Crisp, with director John Ford, the film is told from the eyes of a young boy (McDowell) from a Welsh mining family. Huw has five older brothers, an older sister, and two strong but goodhearted parents. As times get tougher, he sees one brother get married and two others leave for America. Huw faces his own struggles recuperating from an injury and surviving his schooling. Along the way he is aided by the kindly preacher (Pidgeon). However, soon he sees his family torn apart even more when his sister is unhappily married off, a brother is killed, and two others lose their jobs. Then, finally when his sister returns, the town folk start a scandal, and Mr. Morgan becomes trapped in the mine. It does end on a good not and the family stays resilient. This film is full of adversity but more importantly it has warmth and good people. The camera work is excellent and the Welsh singing is memorable.