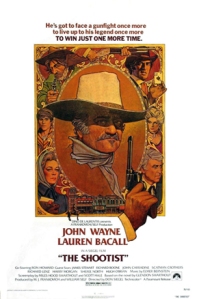 In his last film performance, John Wayne stars alongside Lauren Bacall, Ron Howard, and James Stewart in this tale about a notorious old gunfighter, who comes to stay in a small western town. J.B. Books gets a medical diagnosis from an old friend, and the doctor confirms that he is slowly dying from cancer.

Books pays for a room in the home of a local widow (Bacall) where his reputation and actions one night scare off tenants. He receives a visit from the uneasy local sheriff (Harry Morgan), gets an offer for a book to glorify his life, has an old flame drop in on him, and old rivals and young guns are bent on killing him.

His lifestyle impresses the young man Gillom (Howard), but his mother openly disapproves of Books. Amidst all this, Books desires to live his last days in peace and he is waited on by Bond, and the two of them become to respect each other as her boy also comes to idolize Books more. The shootist sets everything up to die on his 58th birthday, going so far as ordering a special tombstone and sending three separate notes to different gunmen in town. He leaves his horse to Gillom and bids farewell to Bond before heading off for one last showdown.

In the saloon, he is met by three men bent on killing him. Books is wounded but proves his skill one last time. In a cruel moment, however, Books is gunned down right in front of the horrified Gillom, who in a single instant ceases to be an innocent boy and becomes a man.

This film was the perfect swan song for Duke because in many ways the character he plays mirrors his real-life western persona. Gone were the days when he was a kid in Stagecoach, a courageous sheriff in Rio Bravo, or even the gritty old codger in True Grit. He was truly reaching the twilight of his career.

Even it was one of the most storied of acting careers it was finally coming to an end. In just three years he would die of stomach cancer, and there was no gunshot to go with it this time around. During this movie, he still has life in him though, and even when he shares scenes with the whitening and tired-looking icon James Stewart, Wayne seems as resilient as ever. The Shootist is certainly not his greatest film or best performance, but I think it can be said John Wayne went out on his own terms just like Books.