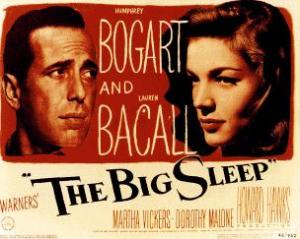 This noir, crime-drama starring Bogey and Bacall with director Howard Hawks, follows private eye Phillip Marlowe (Bogart) in Los Angeles. His difficult and ever changing case has him interrogating every one under the sun and following every lead. In typical Bogart fashion, Marlowe is a tough guy who does not shy away from danger and he has the eye of many a woman. What starts off as a normal case quickly turns deadly, setting the plot off. The constant twists and new characters complicate Marlowe’s case and get him in numerous messes. However, thanks to his grit and wit he comes out on top, falling for the girl, and overcoming his adversary. One word that sums up this film is incomprehensible. Despite the confusion with the plot, this film is very enjoyable and seems to work itself out.

In honor of Lauren Bacall