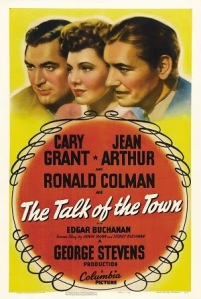 This comedy-drama begins with a rather stark montage chronicling how the unfortunately named Leopold Gilg (Cary Grant) was accused of arson, murder, and finally imprisoned by one owner of a mill named Holmes. After escaping from prison and an imminent conviction, in a torrential downpour, the hampered Gilg seeks asylum in a nearby house. It just happens to belong to Miss Nora Shelley a local teacher in Lochester and an acquaintance of Gilg. She reluctantly allows the injured fugitive to hold up in her attic, but then her new tenant arrives a day early, the distinguished professor Lightcap (Ronald Colman).

After Gilg finally reveals himself to Lightcap as the gardener Joseph, what forms is an interesting triangle with the two men on the sides and Ms. Shelley in the middle. Both men take a liking to each other despite their difference in opinion on justice. Lightcap is much the academic and he goes by the book. “Joseph” on the other hand has a more practical approach.

It does not matter much until the professor finally learns Joseph’s true identity and now he feels it is his duty to report Gilg no matter his affinity for him. But after Gilg gets away once again, the professor is finally coaxed to look into the case that he has been so reluctant to involve himself in. Both men make concessions out of respect for the other. The professor involves himself, buys some borscht, and cuts his beard, while Gilg turns himself in. It almost drives Ms. Shelley up the wall with grief. You see she loves both of them.

In his final search, Lightcap finds something very interesting indeed. The town mob bursts into the courtroom as Gilg stands trial again, but the professor shows up with a surprise of his own. He ends up as the next Court Justice, a very happy man and Ms. Shelley and Gilg are very happy for him. They don’t have much to complain about either.

George Steven’s film has a bit of a contrived plot much like The More the Merrier. Things certainly feel set up, but that’s okay because the cast is so wonderful it makes the set-piece work. Jean Arthur is in top form when she is exasperated and sneaking about making little white lies as people file in and out of her home. Gilg seemed like a rather odd role for Grant, but he pulled it off with his usual charm and charisma. Someone else might have made Lightcap unbearably stuffy, but Colman’s portrayal is always tolerable and very often charming. This had a lot more drama than I was expecting, but it was not short on the comedy either. My only complaint is that it ran a tad long, but it just meant more screen time for the leads. That’s not so bad. They were The Talk of the Town after all.