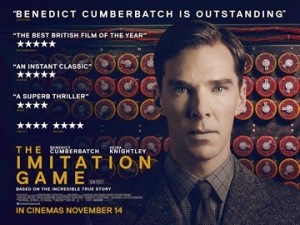 When you think of decisive moments in WWII the conversation leads often to D-Day, The Battle of Midway, The Russian Front and The Battle for the Atlantic. If Britain had been cut off from U.S. supplies the case could be made that The Allies would have undoubtedly lost the war. That’s where the Enigma cipher comes into play and along with it Alan Turing.

Alan Turing is one of the unsung heroes of WWII and in many ways the father of modern computers. He’s a big deal and it’s hard to make that point enough. That’s what makes it exciting that he finally got the biopic treatment and with a portrayal by Benedict Cumberbatch no less. It does not get much better than that!

As far as biopics go The Imitation Game is a polished period piece set in War-torn Britain spanning the years of WWII into the early 1950s. Visually beautiful, scored nicely, and generally uplifting, it feels as wonderfully English as a cup of tea and the English countryside. Although the film at times may trod the typical path of other troubled-genius type films,  it often rises above the usual based-on-a-true-story fray. A primary reason for this is Benedict Cumberbatch who plays Turing not with dramatic outbursts, bravado, and bluster, but quite the opposite.
In the year 1939 Turing, a professor at the time, attempted to join the top secret project at Bletchley Park to crack the German’s Enigma code. He seems like an odd candidate for the job since he has only an affinity for puzzles and no knowledge of the German language, but that proves to be unimportant.
He has the right amount of vision paired with the obsession to come at the problem like no one before him. He does not just want to crack one of the tedious strings, he wishes to crack them all using a machine. It was absolutely unheard of and his colleagues discount him, understandably, because he is not much of a team player and far from a social butterfly. However, he discovers a worthy ally in Susan Clarke (Keira Knightley) who proves to be indispensable in his work as well as repairing his rapport with the team.
With the prospect of all his work with the machine being wasted and terminated, his colleagues back him up in front of his superiors. Turing has one last chance to succeed and someway, somehow he does. But success does not come without great responsibility. Once they have the weapon to counter the Germans they must use it cautiously only taking the most necessary steps. It becomes clear that there is a fine line between playing God with human lives and winning a war.
The war is won in the end, however, and the top secret endeavor is disbanded. Alan Turing is far from a war hero because few know what he did. His only label is indecency and he is given the option of imprisonment or hormones in response to his charges of same-sex attraction. A year later he committed suicide at the age of 41.
Cumberbatch is seemingly the perfect Turing with all the quirks you would expect. Except there are also traces of sensitivity and he so adeptly shows subtle emotions on his face. He was an oft-tortured man inside and out, spanning from his boarding school years to his post-war existence. Keira Knightley on her part is enjoyable as a counterpoint, remaining true to Turing no matter the circumstances.
Obviously you can always call into question the accuracy of these types of films and no doubt artistic liberties were taken, but all in all The Imitation Game did a commendable job of painting a picture of a man’s life in a very different age. Alan Turing finally got the credit he was due, and it was done with a great deal of sensitivity, heart, and even humor which mostly overshadowed any saccharine moments.
4/5 Stars