Playtime is a film that really can be broken into a number of set pieces elaborately constructed by director Jacques Tati. The vignettes begin, surprisingly enough, in an airport terminal, and a group of excited Americans are getting ready for a Parisian vacation. Mr. Hulot (Tati himself) is waiting to have a meeting in a glass office building, however, he soon gets lost in a maze of cubicles, playing cat and mouse with his contact.

Quite by accident, he wanders into an international trade exhibition and the tourists just happen to be there too. While there they are introduced to the latest gizmos, gadgets, and inventions to move society forward. They include silently slamming doors and retractable glasses. In typical Tati fashion, he gives us a glimpse of the old world from Mon Oncle. All that is left is one meager flower stand and a brief reflection of the Eiffel Tower. 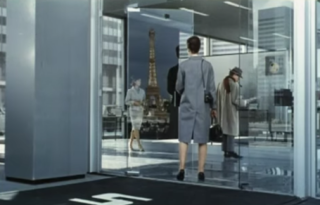 Bumping into an old war buddy, M. Hulot is invited over and thus begins a long sequence in an apartment building. What makes it unusual is that the audience is left out on the street, but we can see multiple interiors through the glass. Thus, the conversation becomes unimportant, and the charades inside paired with the street noise is all we notice.

One of the most substantial sequences takes place in a place called The Golden Corkscrew. It is a packed house and the nightclub barely seems prepared for such an evening. Tiles are loose, food runs out, a band member comes late, the chairs leave marks on the backs of patrons, and much much more. Hulot stumbles in and comes in contact with several previous acquaintances. He also makes a few new friends including a boisterous American and a friendly female tourist.

After the crazy night, the morning comes and Hulot says goodbye to his new American friend but not before leaving her with a parting gift to remember her memorable time in Paris. It may not be the Paris of old, but it is still a cheery place made by its people who still remain the same even when the times change.

Jacques Tati’s Playtime took numerous years to complete and it was the most expensive French production at the time. It makes sense though because it truly is a magnificent piece of cinema. It is full of beautifully choreographed sequences and elaborate sets. Mr. Hulot often finds himself wandering through this labyrinth of modern Parisian humanity. Tati teases us, however, filling his world with Hulot doppelgangers.

Even when the gangly protagonist is on screen, he often pops off and on for minutes on end. He is no longer the primary focus of the film. Tati also takes great interest in the sterile modern society of glass, steel, and technology. The screen is filled with a wide array of individuals, which makes it fascinating to simply people watch. Furthermore, Tati almost refuses to use closeups, thus allowing the camera to capture more.

Playtime is slightly slower, to begin with than I remember, but it has wonderfully subdued humor paired with social commentary. Tati’s film may not have a lot of decipherable dialogue, but there sure is a great deal of noise. His sound effects seem to rival The Three Stooges in comical impact, often filling the void usually devoted to talking. It is moments like these where you see similarities to the old silent comics like Chaplin and Keaton.

Playtime is all about the minutiae and these moments are probably exhibited best at the nightclub. So much happens and much of it goes unnoticed, but oftentimes when you pick up on something the payoff is great because you slowly begin to notice more and more. Tati does not have to announce it, but he puts it there to be seen. For instance, there is the fish that is never served but is constantly being seasoned. Then, the doorman who opens the door without any glass. Finally, there is the waiter who gets all the ripped, torn and otherwise ruined articles of clothing. Together all these moments create some immensely funny sequences.

Another thing about Tati’s film. There is really no conflict. He is addressing the changing times, but at its heart, Playtime is just that. Light-hearted recreation.