In the opening shot, a man is in his tidy-whities levitating in midair. This is one of those films that can never be figured out completely or never fully dissected in its entirety. It’s a meta film on a whole lot of levels. You could say that Michael Keaton is playing a version of himself named Riggan Thomson. He used to be a superstar in the popular superhero series Birdman. That ended back in 1992. Now he’s old and washed up attempting to revive himself in an adaptation of a Raymond Carver play. Robert Downey Jr. is the guy with the type of box office draw that he used to have.  He is constantly fighting his own inner demons that play like the voice of the Birdman in his head. The character he used to be is so closely tied to his identity that Riggan has trouble getting away from it.

The film follows the loss of one of their lead actors to an accident, and there is a rush to find someone else before their first preview showing. They want Michael Fassbender or Jeremy Renner and yet they do get lucky in Mike Shiner (Edward Shiner). However, much like Norton in real life, Shiner proves to be a handful, but also a star performer who the public love. Riggan needs him and his best friend and lawyer Jake (Zach Galifianakis) pleads with him to say with Shiner. All the previews are a disaster: Mike breaks character over some gin and he tries to have sex with actress and former lover Lesley (Naomi Watts) on stage. To add insult to injury, Riggans locks himself out of the theater and thus begins his frantic pilgrimage through Time Square in only his underwear. 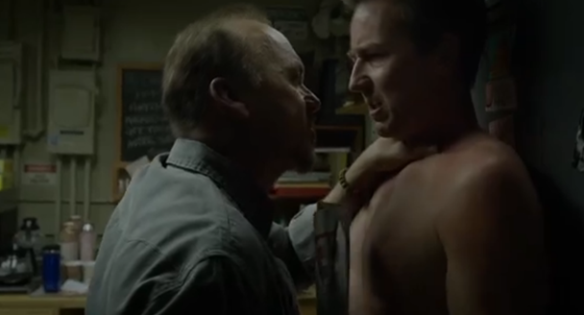 Riggans wrote, directed, and acts in this play to overcompensate for all his failures. He even refinances his house to cover the cost. He’s spent. His daughter and former drug addict Sam (Emma Stone) is his assistant, and although they don’t see eye to eye, they try to be real with each other. She too is a screw-up, but she sees in him someone who confuses love for adoration. He worries about relevancy, fading away, and he is scared to death that he might not matter. In as many words, she tells him to join the club because every member of humanity has these same fears nearly every day of their existence. He is no different.

Following the final preview, critic Tabitha Dickinson says she will tear his play apart because he is one of those Hollywood celebrities masquerading as an actor. After a rough evening, the Birdman comes back to haunt him before the big opening.

Then, opening night comes and Riggan seems strangely aloof on a night with so much riding on it. He does the unthinkable when in his final scene he uses a real gun and points and fires it at himself. The crowds are as surprised as the viewer before bursting into thunderous applause. Riggan has unwittingly become a sensation on Twitter and on the theater circuit.

The story ends in the hospital with Riggan reconciling himself with his daughter Sam. It looks like it could take a fatal turn because the specter of Birdman still remains, and yet along with Sam we get to see something extraordinary, and at the same time ridiculous, happen. They don’t call him Birdman for nothing.

Birdman has received a great deal of notice for its cinematography that was spliced together to look like one continuous shot. At first, it feels a bit gimmicky watching the camera self-consciously spiral around the actors, but it slowly becomes the routine. It feels like a Goodfellas tracking shot on steroids, and it certainly hearkens back to Hitchcock’s Rope as we often find ourselves following characters from behind down hallways or going from interiors to exteriors. It’s certainly a different perspective of the world.

There are moments that it looked like Edward Norton or Emma Stone might steal the show, but by the end, it is still evident that this is Michael Keaton’s film. This is a story about his struggle. This is his version of Sunset Boulevard that he must overcome. It also has an overarching blend of magic and realism that makes it hard to parse through what the true reality is. But by the end that is far from necessary, because this is a meta experience that is layered and inverted in such a way that makes it fascinating. We think we have our feet on the ground, firmly planted, but we never do, and we are never allowed to.

At times it feels rather like we are in Manet’s painting Bar at the Folies Bergere. It becomes difficult to tell if we are in the audience are simply part of the film. We lose ourselves in the metaness that acts as the thin dividing line between what is real and what is fictitious. There is a cinematic magic in that just as there is a kind of supernatural energy in Riggan Thomson himself.

However, he does not get wholly lost in that, because he is a messed-up human being like the rest of us. No matter how mystical he is, there still is an unmistakable resonance to his story. Thomson would be happy to know that he is relevant just like we are all relevant in some way, shape, or form. It’s all subjective. It just depends on who you ask or what critic says what. In reality, it doesn’t really matter a whole lot.

Honestly, it failed to hit me until afterward,  Birdman is a humorous film where the humor often gets forgotten behind the more philosophical and human aspects. There’s nothing quite like it. It takes its cues from Sunset Boulevard, Jean-Luc Godard, Dr. Strangelove, Batman and undoubtedly so much more, but it is distinctively the creation of Alejandro Gonzalez Inarritu.