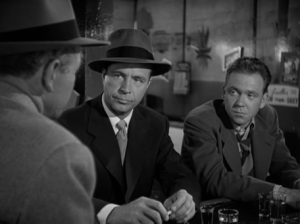 Here is yet another noir gem which would never get made today, much less in a mere 22 days! This directorial debut of Robert Parrish is boosted by an often witty script from William Bowers.

Rocky Mulloy (Dick Powell) is fresh out of prison after a former marine (Richard Erdman) testifies on his behalf though Mulloy already spent five years rotting away in prison. He went in right around the end of the war because of a robbery that he was assumed to be a part of.

Regis Toomey (The Big Sleep, Raw Deal) is Lt. Cobb and he is still skeptical when he is assigned to monitor the newly released man. Richard Erdman is the peg-legged, alcoholic marine who has a penchant for booze and dames. Also, he never actually knew Mulloy before. He just wants some of the loot.

So the two new found chums set up camp in a beat down trailer park of all places, with a music playing proprietor (Jay Adler). It’s not exactly the Ritz, but Delong finds some female company, and it just so happens that Mulloy’s former flame lives there too. Nancy (Rhonda Fleming) is married to Rocky’s pal Danny who is still in the clink. His mission is to prove his innocence, but could it be more harm than good?

Rocky goes to a local mobster named Castro (William Conrad) who left him holding the bag five years ago, and he wants reimbursement for his time. He gets some of it in the form of a horse race which leads to a big payoff.

But as it turns out, the money is hot and Lt. Cobb wants to know where it came from. Rocky obliges but it becomes all too obvious he’s being set up. There was one slip up though, proving Rocky is telling the truth for once, amidst all the lies swirling around. That does not help Delong much and his girl Darlene gets blown sky high. The bullets were obviously meant for Rocky and  Nancy. 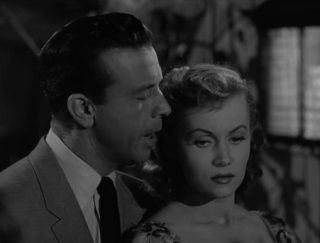 Rocky confronts Castro and they play a little game he likes to call Russian Roulette, although it’s very one-sided favoring Rocky. The fearful mobster spills the truth, revealing Danny was actually a part of the plan 5 years ago all the time. Since he took a lighter rap, someone else is holding his share of the payoff. The missing $50,000. Who is keeping it warm for him? You guessed it.

Rocky goes back to the trailer park where Nancy spills all her beautiful guts to him. What she gives is a tempting offer and Mulloy lets her believe it will happen. Off he walks with Lt. Cobb ready to swoop in. Rocky may have gone straight, but it doesn’t mean it makes it any easier. He had to turn on one of the most beautiful girls in the world, courtesy of Rhonda Fleming.

Dick Powell has another laconic performance which nearly matches his turn as Philip Marlowe in Murder, My Sweet. I always love seeing Richard Erdman as a young jokester, because he has gained a following more recently for his work in the television show Community as Leonard. William Conrad will always be the narrator in Rocky and Bullwinkle as well as Cannon. However, his big frame and mustache make for a good criminal type. What can I say about Rhonda Fleming except that she looks stunning in black and white, much less technicolor?