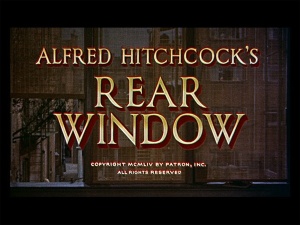 Who in their right mind would make a film that takes place in a courtyard? Rear Window has always been fascinating from a technical standpoint, and Alfred Hitchcock is certainly not “The Master of Suspense” for nothing. He uses the confined space of a single Greenwich Village courtyard with an incapacitated individual to truly build the tension to immeasurable heights. The events within the film are often highly bemusing as Hitchcock has a wicked sense of humor, whether Jefferies is trying desperately to scratch that itch or the conversation turns morbid as he tries to eat breakfast.

The script has so many great little moments of back in forth repartee; some supplied by the always dynamic Thelma Ritter who plays the nurse with a lot of advice and opinions about rear window ethics: “We’ve become a race of peeping toms. What people ought to do is get outside their own house and look in for a change. Yes, sir. How’s that for a bit of home-spun philosophy.

James Stewart is always a pleasure, but this time around he is perhaps at his most constrained as famed photographer L.B. Jefferies, who is laid up in his apartment for weeks on end with a leg in a cast. He got the injury thanks in part to his last big photo shoot where he ran in front of an oncoming race car. With nothing better to do, he spends his idle moments people watching and getting to know his neighbors. That’s one way to put it at least. As an actor, Stewart is stuck and relegated to conveying his whole performance through his gaze and the dialogue he speaks to those few who come in and out to see him. Most of what he’s doing is simply looking across the way and yet it works.

His neighbors are as follows:

There’s Ms. Torso who is an aspiring dancer and always the target of many men. There’s Ms. Lonelyheart who never can find the love she so desires. A washed-up composer spends the entire film trying to figure out his newest project (even getting a visit from Hitchcock himself). There are the newlyweds who hardly ever leave their bedroom because they’re doing something… Then, comes the older couple on the second floor with a cute little dog and the sculptor who lives below.

Most interesting of all is the couple directly across the way from Jefferies’ because that’s where a long-suffering husband and his wife live. All seems normal, to begin with, however, Jefferies begins to have his suspicions thanks to circumstantial evidence and no sign of Mrs. Thorwald. His first thoughts immediately shoot to murder, but it seems highly unlikely. Day and night he continues to watch seeming to get more evidence, only to have his theories crushed, and then gain new hope through more evidence. 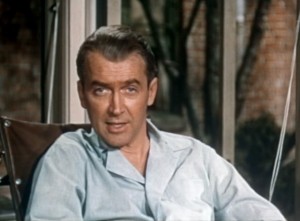 The interesting part is that as an audience we are fully involved in this story. We see much of the picture from Jefferies’ apartment, because there is no place to go, and so we stay inside the confines of the complex. In this way, Hitchcock creates a lot of Rear Window‘s  plot out of actions occurring and then the reactions that follow. We are constantly being fed a scene and then immediately being shown the gaze of Jefferies. It effectively pulls us into this position of a peeping tom too. Danger keeps on creeping closer and closer as he discovers more and more. The narrative continues to progress methodically from day to night to the next day and the next evening.

In the climactic moments, he finally faces the man who he always looked in at from the outside and yet by the end the roles are reversed with Jefferies space being fully invaded, and yet he can do little to flee, because of his cast. Hitchcock cuts it in such a choppy and chaotic way which breaks with the smooth continuity of the rest of the film, but it works so wonderfully in stark juxtaposition.

This is one of the main appeals of Rear Window because it has this Hitchcockian story of murder, mystery, and suspense. However, I am constantly eager to revisit this story, since there are so many other intricacies that are of interest.

Although the film uses a score by Franz Waxman, the majority of the sounds heard are diegetic and they either are street noises or music wafting around the courtyard from one of the apartments.  Also, there is only one small outlet to the outside world. At times, it becomes fun to survey what is going on whether it is kids playing on the street corner or cars passing back and forth. It builds this sense of realism suggesting that this world that has been created is larger than this one set full of apartment buildings.

Another important element is themes of romance and love. Jefferies comes into the film with issues in his own love life. His girl is the elegant and refined Lisa Fremont (Grace Kelly), who seems perfect, too perfect in his estimation. In his mind, they just don’t seem compatible enough, and he cannot see marrying her. It’s something they have to work through because she truly loves him.

Really every character essentially has a different outlook on love and different struggles, because romance is never an easy thing. Like the lyricist’s song, it is so often fragmented, but in their case, Jefferies and Lisa seem to figure things out just as the song finally gets finished. The moment where you can see it in Jefferies’ face that he is both impressed and worried for Lisa’s safety seems to be the time when things change. He realizes his love for her since she is very dear. He quits his thinking and his analyzing of their relationship, as gut-wrenching emotions take over when she is caught. In a sense, he listens to Stella’s earlier advice: “Look, Mr. Jefferies, I’m not an educated woman, but I can tell you one thing. When a man and a woman see each other and like each other they ought to come together – wham! Like a couple of taxis on Broadway, not sit around analyzing each other like two specimens in a bottle.”

Wendell Corey, in his supporting role as Jefferies’ friend and the police detective, is a man who can be a skeptic and still prove his loyalty as a friend. They can be at odds and still poke fun at each other with mutual affection. It feels real. Raymond Burr as the villainous Lars Thorwald works well too because he is certainly an angry, unfriendly grouch, but he does not seem altogether evil. It shows how easy it is for the lines to be blurred. 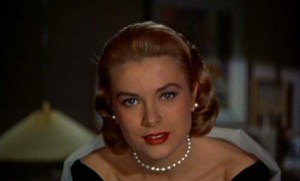 Above all, Grace Kelly shines opposite Jimmy Stewart. There’s no one quite like her, so elegant, eloquent, with a touch of playfulness and adventure. She is willing to fight for her man and even go out on a limb for him (ie. breaking into Thorwalds’ apartment). One of the film’s most extraordinary images, out of many, has to be when a shadow covers the face of Stewart as he rests. Then there is a close-up of Kelly, her face slowly descending towards him. It’s hard to forget and for the rest of the film, she attempts to not let him forget her.

It’s not often easy for me to make statements like this, but Rear Window has to be close to my favorite film of all time. Yes, I said it. It never gets old for me, and I pick out new things every time. It’s more than just a mystery thriller. Hitchcock made it a technical marvel that is also steeped in themes of love and ethical questions. The players are the best of the best from James Stewart, to Grace Kelly, to Thelma Ritter, all down the line. It’s at times deliberate, but never boring, completely immersing the viewer into this drama as a firsthand witness. It’s the type of cinema we just don’t get every day because it has everything and it cuts to the core — to the most visceral level. That is the sign of cinematic greatness.