Breathless is such a fresh, smooth piece of cinema that feels as cool now as it was back then. The transcontinental French vibe paired with the revolutionary production is strangely still appealing. It does so many things with such style that is always unique but never quite off-putting. Not to mention the score which is playful in an elegant sort of way. The film has an array of quick cuts, it’s discontinuous, abrupt, and it literally jumps between images. Actions, like shooting a cop or sitting in a room with a girl, become more interesting than we could ever give them credit for.

Godard is known for saying that all you need for a film is a girl and a gun and that’s basically all Breathless is. Michel (Jean-Pierre Belmondo) is a low down, no good hood who also happens to be quite funny at times. He shoots a cop for no good reason and after that, the police are after him on the streets of Paris. 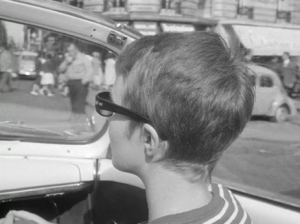 He’s also broke and all his buddies are either unavailable or in some trouble of their own. He swipes money from one girl and rendezvous with his latest fling, the aspiring American journalist Patricia (Jean Seberg). They do very little except drive around the city or lounge around her room. In one memorable shot, jump cuts piece together scenes of the back of Patricia’s head as she sits in the passenger seat observing the world around her pass by.

Michel, on his part, seems only to want sex and yet he says he’s never loved a girl before. He’s continually drawn to Patricia, and he never can quite pull himself away.

She, meanwhile, has another man with an eye on her, and she hopes to propel her fledgling journalism career. Her one assignment happens to be interviewing the highly philosophical and somewhat pompous Mr. Parvulesco (Jean-Pierre Melville). 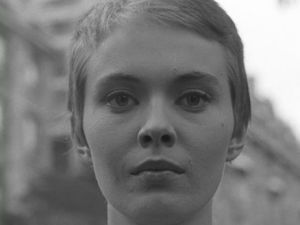 The billboards around town even foreshadow the impending doom of Michel. Patricia later learns from the police that her lover is wanted for murder, and she must decide what to do about it. In a memorable scene, Patricia is shown pacing around the room in a wide circle. In the end, she does turn in the hood to prove to herself that she doesn’t truly love him.

Michel looks utterly pitiful, like a wounded deer after he gets winged by the police and collapses in the middle of a quiet avenue. Patricia stares straight at the camera giving the queerest of looks as Michel breathes his last. If you wanted narrative clarity you’re definitely looking in the wrong place.

In some ways, Jean Seberg’s iconic look reminds me a young Audrey Hepburn another gamine glamour girl. The photography of Seberg is iconic from the reflection in her sunglasses to her donning Michel’s hat. Breathless proves film is not just entertainment, but it can also be lastingly stylish. There’s nothing wrong with that, and it still seems to work after over 50 years. Honestly, when I was starting out, Breathless helped open up all of European cinema to me and for that, I am indebted to Godard and The French New Wave.