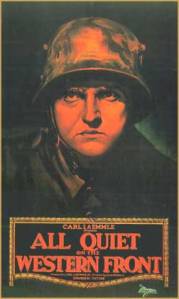 Directed by Lewis Millstone and starring an ensemble cast headed by Lew Ayres, this archetypal anti-war film based on the novel of the same name, begins with a group of school boys during the dawn of WWI. This group of patriotic German youth is hungry for adventure and the glories of war.

Then they arrive and begin their training which causes them to despise their commanding officer and they also lose some enthusiasm. It gets worse when they head to a combat zone and join a company of veteran soldiers without any food to eat. They finally head to the front and after a day in the trenches their number is fewer.

Trench warfare proves to be hardly as glamorous as it seems with constant bombardment, rats, lack of food, and most of all the shedding of blood. One of their pals loses his leg and his boots, then slowly more get knocked off or wounded. Now Paul is one of the only ones left but after a bout of hand to hand combat with a French soldier he becomes even more disillusioned. Paul too gets wounded and is sent home on furlough to his family but he finds his friends and family have no concept of the gritty, grimy reality of war. He returns to the lines one more time and a few of his old comrades are still alive.

However, in a fateful moment Paul reaches out for a butterfly in his trench and just like that he is dead. The last of this school room full of young, naïve boys is now dead or injured. That is the horrible scar left by not only by WWI but any such conflict.

Despite the fact that all the main German characters are played by Americans, this film has a sharp sense of realism that extends all the way through the film. Even though many of these young actors were unknowns and are not well known today, together they made a powerful ensemble. The themes of this film were so powerful in fact that it was banned in Germany.