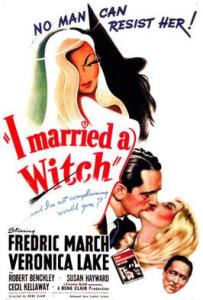 Directed by French emigre Rene Clair, I Married a Witch is a surprisingly cheeky comedy for the 1940s. The plot opens up with the Salem Witch Trials where a male and female witch are both to be burnt at the stake. However, before dying they cast a curse on the lineage of one Jonathan Wooley (played in Puritan garb by Fredric March), and so going forth all his ancestors are doomed to accursed marriages.

Now in the present (1942), the current ancestor Wallace Wooley (March) prepares for a run at the governorship as he also prepares to marry his disagreeable fiancee (Susan Hayward) to bolster his appeal on the campaign trail. Meanwhile, the spirits of Jennifer (Veronica Lake) and Daniel (Cecil Hathaway)  are finally released from their prison and they head out ready to cause all sorts of mischief. At first, they travel as smoke floating through the air and residing inside bottles. However, Jennifer has the brilliant idea of taking on human form so she can torment Wooley even more.

They follow to burn down the Pilgrim Hotel and then Jennifer gets Wooley to unwittingly rescue her from the burning remains, a hero. Little does he know what’s he’s done. She pulls all sorts of pranks on him that leave a bad impression on his housekeeper and are bound to get him in the doghouse with his fiancee. Veronica Lake is very alluring in a sing-song sort of way as her character tries to playfully seduce Wooley. She even crafts a love potion, but plans go awry when she actually ingests it. Now she’s hopelessly in love and she must try and crash Wallace’s wedding to win him back.

Joined by her father in physical form, they put the proceedings to a halt with a gust of wind and then Daniel tries to impede Jennifer by turning her into a frog, but he ends up drunk instead. Of course, Wallace is caught in yet another awkward spot with the witch. The wedding is off (along with the dreadful song “I Love You Truly”) and the campaign is done for…or is it? 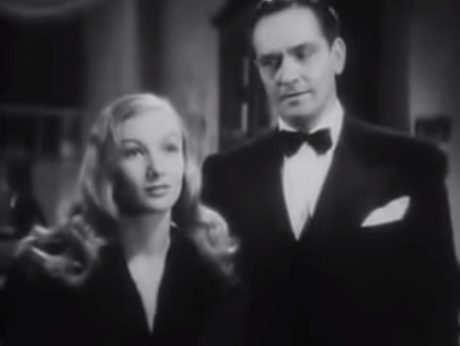 In the end, it looks like Wallace might lose his new found love, but she comes back to him, the moral of the story being, “love is stronger than witchcraft. It conjures up a Frank Sinatra song right about now.

This film has a whimsically absurd scenario bolstered by simple special effects that allow buildings to burst into flame, Jennifer to slide up the banister, and Daniel makes the car levitate. This is an obvious precursor to a pair of 1960s sitcoms. Veronica Lake’s performance is very reminiscent of Jeannie in I Dream of Jeannie and the plot feels like a plot line out of Bewitched since our heroine is also a witch. Too bad Robert Montgomery was not in this film. His daughter was a witch after all.