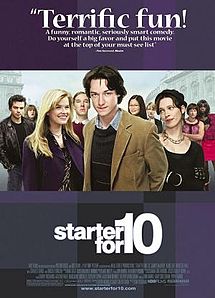 Oftentimes I get my greatest excitement not simply from the masterpieces I get to discover, but also hidden gems that get unearthed along the way. This one just happens to have some of Britain’s best talent. Starter for 10 is a coming-of-age film which immediately sets off a number of ideas in one’s head, and it has most of what you expect in that department. However, it also has an astounding plethora of young British talent. The list of names is as follows: James McAvoy, Alice Eve, Rebecca Hall, Benedict Cumberbatch, Dominic Cooper, and even James Corden.

The heart of this film is Brian Jackson a college-aged kid, who grows up wanting to be clever and he has a passion for trivia because he always wants to learn more and he spent some formative moments in front of the telly with his now deceased dad. Now in 1985, he gets ready to leave his mother (Catherine Tate) and head off for new experiences at Bristol University. But she’s not the only one he leaves behind. His friends Tone and Spencer are not as ambitious as him, but he promises not to forget them.

Still, when he gets to college, he’s excited for the new challenges ahead and although his first acquaintances are rather odd, he does meet the winsome girl Rebecca Epstein (Rebecca Hall), who has an affinity for political protests. Soon he’s quick to join the University Challenge quiz team anchored by a very stuffy post-grad (Benedict Cumberbatch) but that’s not all. He also gets his first encounter with the posh girl with a gorgeous figure (Alice Eve). He’s immediately smitten with this new quiz kid and for good reason.

But what follows is all the drama that one would expect. The pitter-patter of his beating fragile heart as he dreams of days with the beautiful Alice. It even manifests itself in a dinner date and a rather awkward New Years with her parents. But then there’s Rebecca too. She’s brilliant as well and he has to figure out what he’s doing. Mixing up names on New Year’s Eve is not the best plan, but of course, that’s what happens.

His best friend Spencer (Dominic Cooper) comes to visit and that fosters more turmoil than Bri would like with the old world intersecting with the new. He’s confused and apathetic about the University Challenge by now. Everything goes wrong before the big day of the final competition and to top it all off Brian messes things up in a big way that leaves him dejected. He cannot even face his team now. Early on Brian latched onto the idea that knowledge is the key to being happy, not a job that you might hate. Although that can be true, it seems he slowly realizes that there’s even more to happiness than knowledge. If that’s all you have, you’re probably not going to be all that content. You see, he’s certainly clever, but that doesn’t mean he doesn’t do some stupid things and make some big mistakes. Don’t we all, and otherwise, this could not be a coming-of-age story full of discovery, confusion, and love.

It’s a bad metaphor, I know, but do you want the Marilyn Monroe blond bombshell or the sweet Audrey Hepburn brunette? Everyone has their proclivity, but Brian seems to make the right choice because he doesn’t go with the outward appearance, he goes with the one with a depth of character and the ability to forgive. That’s big.

There’s a formula being followed certainly, but it’s easy to look past that and enjoy Starters for 10 for its heartfelt performances and simply the good fun it brings to the table. The names attached to the picture were slowly on the rise and it’s impressive to see how far their careers have taken them.